Update: Alan Brogan denies he has retired from inter-county football

The former Footballer of the Year was clearly devastated at Croke Park yesterday.

As Dublin supporters, and everybody outside Donegal, come to terms with the shock of the GAA season yesterday, Monday morning brings more sad news for the Dubs.

RTE are reporting that Alan Brogan, a two-time All-Ireland winner, a three time All Star and Footballer of the year in 2011, has announced his retirement from the inter-county game this morning.

Brogan, 32, was clearly very upset after yesterday's shock defeat to Donegal and the sight of him in tears, with his son Jamie was probably a sign that he knew he would never grace the Croke Park pitch in blue again. 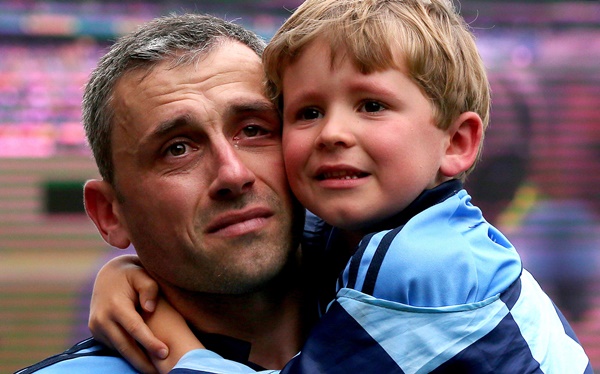 END_OF_DOCUMENT_TOKEN_TO_BE_REPLACED

Brogan played 62 times for Dublin, scoring an impressive 11-127 and he has battled back from serious injuries to remain one of the best of a very talented bunch of forwards at Jim Gavin's disposal.

Brogan was, with brother Bernard and keeper Stephen Cluxton, among the most senior players on the Dublin panel, so his loss will be keenly felt in the panel while every fan of Gaelic football will miss seeing his skills on the pitch.

UPDATE: Alan Brogan has just tweeted to say that he has't made any decision yet on his inter-county career.

Not sure where it came from but I have not retired, my family and teammates will be the first to know that.

The Big Reviewski || JOE · The Big Reviewski with Andy Serkis, Squid Game follow-ups & the return of Succession
popular
New €140 million road officially opens today, replacing one of the Ireland's most dangerous roads
Expert wants 10 antigen tests delivered each week to every family this winter
QUIZ: Can you master this General Knowledge Quiz?
The cleanest towns in Ireland have been named
10 things I learned while rewatching the first two seasons of Succession
The JOE Friday Pub Quiz: Week 265
The JOE Movie Quiz: Week 124
You may also like
1 week ago
Wicklow GAA to investigate fight after Under 15 match on Saturday
1 year ago
Post-match celebrations and a lack of social distancing at certain events put club game on hold
1 year ago
Cork GAA pleads with clubs and supporters “not to engage in celebrations that breach current guidelines”
1 year ago
What's the Bronco test and why it may come up in conversation this week
1 year ago
The Andy Moran GAA Isolation Workout
1 year ago
SuperValu, Centra and the GAA team up on initiative to support elderly people
Next Page