Australia manager Alastair Clarkson wants to see a team from the United States added to the International Rules series at some point in the future.

Clarkson was speaking in New York last week, where his side was training ahead of Saturday's match at Croke Park.

"It'd be great to bring in another side into the competition so it'd become a tri-series, and then who knows where it expands from there," he said. 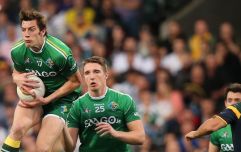 Pic: The International Rules players might have some sore heads on the plane home

END_OF_DOCUMENT_TOKEN_TO_BE_REPLACED

"We'd love to do that, in actual fact we had plans to try and do it for this year, it didn't come off for this year. We want to invest in this part of the world.

“We can sow a seed over the next couple of weeks about the concept of playing a game here – and maybe even somewhere further down the track having a US-based side that can participate in a tri-series rather than just have us and Ireland playing.

"We really want showcase our game to the world, and the best opportunity of doing that is to take it to Europe, which are doing by playing at Croke Park, but if we could take it to the eastern side of America then that would be really exciting for our game."

Advertisement
House of Rugby Ireland · Quinn Roux on finding a home in Ireland and Mike McCarthy brings the absolute HEAT!
popular
Holly Willoughby criticises influencer for travelling to Dubai during pandemic
QUIZ: Can you name all of these countries just from one of their cities?
New Zealand set to close its borders for the entirety of 2021
Leo Varadkar says if Ireland introduced mandatory hotel quarantine, it would have to do so for a year
QUIZ: Do you know the collective name for these groups of animals?
Status Yellow rain warning issued for 12 counties
Vials of Covid vaccine in Louth and Meath area dumped as they weren't stored properly
You may also like
6 years ago
Pics: What the f*ck is going on at International Rules training in Melbourne today?
6 years ago
Pics: David Moran plays the Ashley Cole role as the Irish International Rules squad head Down Under
6 years ago
Video: Two minutes of Tyrone’s Mattie Donnelly doing an intense gym workout before heading to Oz for the International Rules
6 years ago
Pic: Here are the brand spanking new Irish International Rules jerseys
6 years ago
So there were a few rule changes made to the International Rules Series today
7 years ago
Video: Touching tribute to Jim Stynes last night at Croke Park
Next Page