It did not go unnoticed during coverage of Scotland’s victory over England on Saturday.

The BBC has offered an explanation as to why the line ‘Nigel Owens is a gay’ appeared on subtitles during the station’s coverage of the Six Nations clash between Scotland and England.

Viewers tuning into the BBC coverage spotted subtitles which read: 'Yellow card. Nigel Owens is a gay penalty and yellow card' in the 66th minute of the game after Sam Underhill was cautioned by the well-respected referee. 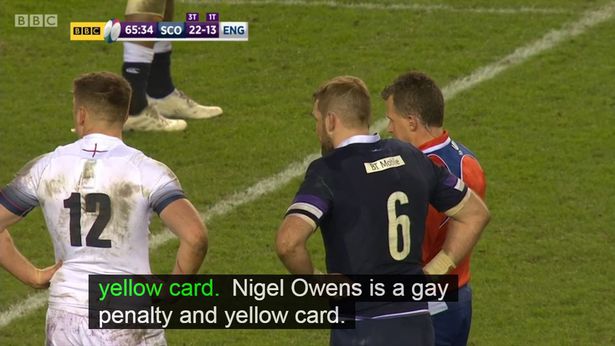 Anyone just notice that the rugby subtitles said “Nigel Owens is a gay and it’s a yellow card”?

END_OF_DOCUMENT_TOKEN_TO_BE_REPLACED

The subtitles were immediately corrected to read: 'Nigel Owens is saying penalty and yellow card.'

Explaining the incident to Wales Online, a BBC spokesperson said: “Our live subtitling service produces accuracy levels in excess of 98% but, as with all broadcasters, there are instances - particularly during live broadcasts - when mistakes happen.

"On this occasion the voice recognition subtitling software made an error which was spotted and corrected immediately."