"We beat the Brits, what did I tell ye?" Ireland's gold medallists give a colourful post-race interview

Shane O’Driscoll and Mark O’Donovan prove that Skibbereen is the rowing capital of the world.

The West Cork lightweight pair claimed a gold medal in the European Rowing Championships and were in triumphant mood in their interview with RTÉ Sport afterwards.

Their clubmate Denise Walsh produced a brilliantly timed row to take silver in the lightweight women's single sculls shortly afterwards to make it a memorable morning for the Irish. 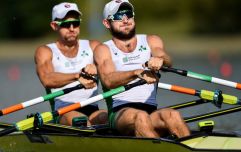 O'Donovan brothers along with UCC crew row to victory in Bulgaria

END_OF_DOCUMENT_TOKEN_TO_BE_REPLACED

The post-race interview was reminiscent of Skibbereen's Paul and Gary O'Donovan at last year's Olympic Games - the West Cork duo compete later this morning in the lightweight men's double sculls.

"The drop of whiskey they gave us before the race... I threw up just now!” - *warning, colourful language #RTEsport pic.twitter.com/tUL1aLAZAN

popular
Nearly 100 flights delayed at Dublin Airport on Monday
QUIZ: Can you get top marks in this short but tricky Irish geography quiz?
Family of Ashling Murphy share heartbreaking tribute at Fleadh Cheoil
RTÉ tries to solve Michael Collins murder in new documentary
4-year-old girl killed in Sligo caravan park named as Alice Dunleavy
QUIZ: Can you score 12/15 in this difficult General Knowledge Quiz?
The 50 most iconic songs of all time* have been revealed
You may also like
5 years ago
EXCLUSIVE: The Young Offenders want to play the O'Donovan brothers in the film of their lives
7 years ago
Video: Rowing team freaks out while being attacked by flying carp
7 years ago
Video: This rower heartbreakingly fell out of his boat midway through a race
1 year ago
Four Irish players propelled into Lions debate after England hiding
1 year ago
Craig Casey and Johnny Sexton combination backed for Italy clash
1 year ago
Defence grows for Billy Burns after one of the roughest days of his rugby career
Next Page