Blooper Bowl: The funniest moments from the NFL this season

It's not all fun and games, but it is at least some of the time

Football is serious business, of course, but not all the time. Every now and then something pretty funny happens, and we can all have a good laugh whether it's on the field or off it.

This season, there have plenty of moments that brought us a chuckle, so JOE decided to have a look back over some of our favourites so far.

END_OF_DOCUMENT_TOKEN_TO_BE_REPLACED

Knowhson Moreno is an emotional man, and he loves his country. His country is MURICA YEAH! Anyway, during the national anthem earlier this year, he couldn't hold back that emotion and released some of the biggest and most amazing tears we've ever seen emitted from a human. They're almost hypnotic...

Backpage headlines for the wrong reasons

END_OF_DOCUMENT_TOKEN_TO_BE_REPLACED

As a defender, you didn't often get the chance to return the ball to the house for a touchdown, but if you manage to pick off the quarterback and the field opens up for you, then your name will be up in lights. However, what you do have to do is make sure that you get the ball over the line seeing as that is how they define a score, and unfortunately Broncos' linebacker Danny Trevathan either didn't know that or totally forgot it. Either way, this turned from a pick six into a drop six. Whoops...

Danny Trevathan wasn't alone in not remembering all the rules of the game, as a few Dallas players were caught in a similar situation earlier in the season against the Giants, when they conveniently forgot that you need to tackle a player before he goes into the endzone to prevent a touchdown.

No one likes Tom Brady?

For love nor money, Tom Brady's teammates really don't want to high five him. It's not that it happened once by accident, it keeps happening, from the regular season all the way through to the playoffs.

And again and again... 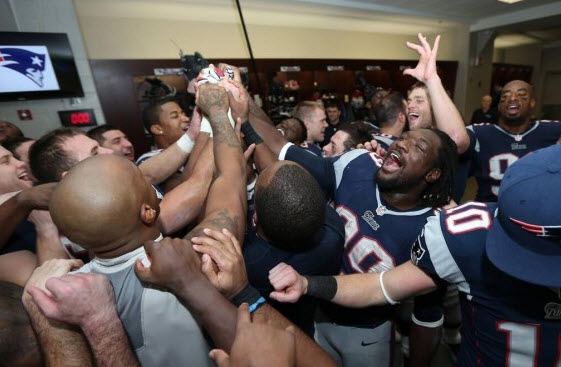 We suppose that his millions of dollars, super-model wife and several Super Bowl rings will be mere scant consolation for being left hanging so often.

The Manning brothers got rhymes

Eli and Peyton Manning are no strangers to media coverage, especially this week given the media scrums Peyton will have to put up with in the run up to Sunday's big game, but they're also no stranger to taking the piss out of themselves a little bit. This year, right before the season started, they released this brilliant video of them rapping about the latest Direct TV offering of NFL games on your mobile device.

Still, Football Cops from a few years ago is going to take some beating.

The most electrifying corner in the game, Richard Sherman

Richard Sherman grabbed all the headlines after the NFC Championship game against the San Francisco 49ers this year when he went off on one in the post-match interview with the lovely Erin Andrews. While that's been seen to death, this remix of the video featuring 'Mean' Gene Okerlund of WWF fame is absolutely brilliant and worth another look.

popular
Netflix has just quietly added 12 big movies to its library
Gardaí deny asking Cork shop to stop selling Animal Bars
HSE urges public to stop using popular e-cigarette
Wagatha Christie: Rebekah Vardy storms out of court just 30 minutes into final day
The 50 most iconic songs of all time* have been revealed
Man dies after being struck by lorry in Tipperary
Viewers left emotional following Derry Girls finale special
You may also like
2 months ago
30 years ago, Arnie's biggest prank ended with Stallone's biggest flop
3 months ago
China gives Fight Club a new ending, manages to completely change the plot of the movie
5 months ago
Who tweeted it: Simu Liu or Rahul Kohli?
6 months ago
Cow escapes field, heads to resort and gets stuck on water slide
7 months ago
Drunk man reported missing ends up joining search party to find himself
8 months ago
WATCH: The interview between Niall Horan and Lizzo is an absolute flirt-fest
Next Page