JOE looks back through the sands of time to remember a few of our favourite lesser known wrestlers from the WWF back in the day, from Yokozuna to Brutus 'The Barber' Beefcake

This month marks the seventh anniversary of the death of one of our favourite lesser-known wrestlers, Yokozuna, who was briefly WWE champion for about four minutes at Wrestlemania IX, before they decided that Hulk Hogan should hold the belt again.

With that in mind, we thought we should cast our minds back to a simpler time when we all called it the WWF, a top rope move was only for the big-time Charlies, and the chances of seeing a chair shot on the highlights show on Saturday morning were few and far between. And in honour of the big fella's anniversary we decided to remember some of our favourite wrestlers who might not have reached the famous heights of Shawn Michaels or Ted DiBiase.

END_OF_DOCUMENT_TOKEN_TO_BE_REPLACED

Starting with the man who inspired us this morning, Yokozuna was, and takes his name from, the highest rank achievable in sumo wrestling. He was often followed around by his manager Mr. Fuji, who carried some salt or other nefarious powder in little packets, and would throw it in the eyes of his opponents, rendering them unable to see and thus they would lose the match. How did the refs keep missing that? Some of you may remember this excellent piece of footage where wrestlers and sports stars alike competed in a challenge to lift him off the ground aboard an aircraft carrier. Simpler times...

END_OF_DOCUMENT_TOKEN_TO_BE_REPLACED

Repo Man swears blind that he wasn't a crook, he was just repossessing goods that hadn't been paid for, but that Hamburglar-style mask and the fact that he used to sneak around in the middle of the night with bags marked "swag" made us think otherwise.

If there's one thing the WWE loves having, it's a big tall guy who is "impossible" to defeat because he's so tall. Often, he's referred to as Giant Somethingorother and that was the case with the 7ft 7" Argentine professional basketball player Jorge González, although he was also known as El Gigante. We remember him best for his feud with The Undertaker and his unique outfit choice. Not many men are brave enough to go with the nude onesie... 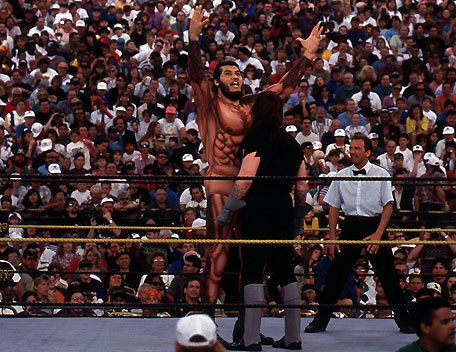 END_OF_DOCUMENT_TOKEN_TO_BE_REPLACED

He was better known in later years as X-Pac, but the 1-2-3 Kid was a pretty successful character in his own right, and had a big feud with the one and only Razor Ramon, before later being taken under his wing. He won the tag team titles with Marty Jannetty while under that guise, but left for WCW before coming back as X-Pac a few years later.

Saturn is not too obscure, but he certainly had a varied career in the WWE after joining with a few of WCW's biggest stars Dean Malenko, Eddie Guerrero and Chris Benoit. Memorably, there was a brief period where he was involved in a romantic relationship with a mop. 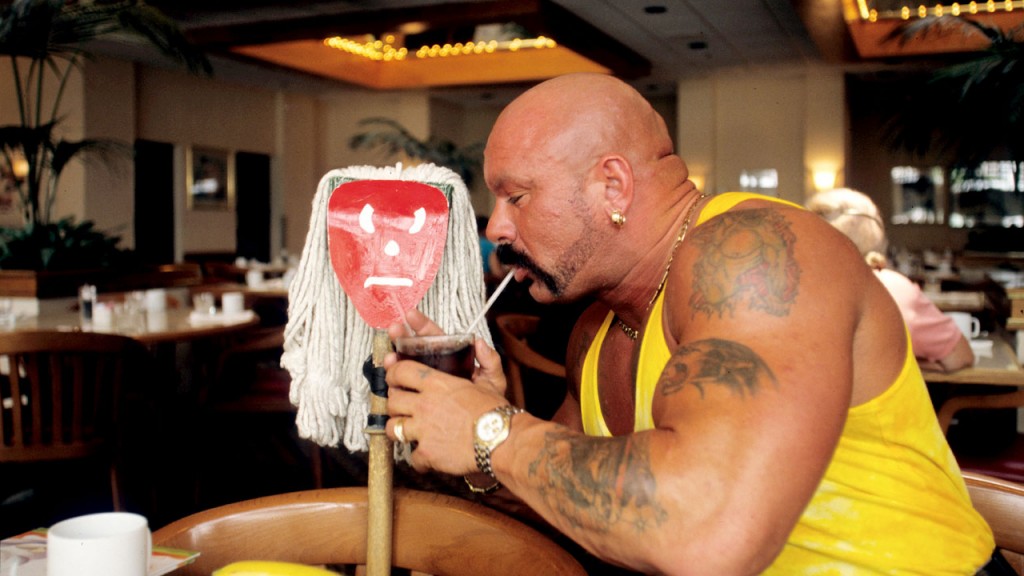 According to his character's bio, Kamala was a warrior/savage from Uganda, who was so unpredictable that no one knew what his next move was going to be. He used to bodyguard for Idi Amin (former president of Uganda) too apparently, and he had a decent run with feuds against The Undertaker and Hulk Hogan, although he never got any gold around his ample waist. In this clip, one of his "handlers", The Reverend Slick, teaches him how to bowl in an effort to civilise him a bit.

Back in the day, the Million Dollar Man Ted DiBiase had quite a posse at his disposal, one of whom was muscle-bound numbers man Irwin R. Schyster, who we presume was in charge of looking after (cooking) the books for the big man and the two even claimed tag team glory together. Here's some helpful tax advice from the big man, who we assume really knew his stuff.

He was a bit rough and tumble, but the Brawler knew how to fight. He learned it from the mean streets of Brooklyn, and Bobby 'The Brain' Heenan introduced him to the world, claiming that despite his disheveled appearance, he could make anyone a star. He never had any particularly big successes but he was a crowd favourite, especially when he appeared at a WWE event in Brooklyn in 2012 after a few years out of the ring.

Hailing from New Zealand, the Bushwhackers were made up of cousins Luke and Butch. Their behaviour was eccentric and their entrance was certainly something to behold. Perhaps they remain one of our favourites because they never got to clinch the title, but they were great entertainment value, as evidenced by this interview with the timeless Mean Gene Okerlund

Best remembered as the tag team partner of Hulk Hogan, he claimed to be about two things only: cuttin' and struttin'. We're not sure about going to him for a haircut seeing as he used mostly a garden shears, but he was one seriously tough guy outside the ring. He was nearly killed in a parasailing accident at the height of his fame in the WWF, but came back to the ring after two years out, several surgeries and, according to the WWE, eight titanium plates, 32 screws and 100 feet of steel wire holding his face together. Here's him and the Hulkster handing out some of the Million Dollar Man's ill-gotten gains to the crowd at Wrestlemania.

Hat-tip to WWE.com, and TheTallestMan.com for the pictures

popular
County where winning Lotto jackpot ticket worth over €5.5 million was sold confirmed
Jordan Peterson suspended from Twitter over Elliot Page comment, says he won't apologise
The JOE Friday Pub Quiz: Week 301
Parent's Benefit Leave in Ireland is being extended from today - here's what you need to know
One of the best sports movies of recent years is now available to stream at home
QUIZ: Can you name all the counties in Ireland without the letter 'A'?
Landlords must give longer eviction notice periods under newly passed legislation
You may also like
2 weeks ago
Vince McMahon steps back as WWE CEO amid probe into alleged misconduct
3 months ago
QUIZ: Can you name the wrestler based off their finishing move?
3 months ago
WWE legend Scott Hall has died, aged 63
10 months ago
Dwayne 'The Rock' Johnson says gruesome injury is the reason why he doesn't have six pack abs
11 months ago
WWE superstar explains why he eats breakfast cereal after a workout
1 year ago
Dave Bautista talks about Sheamus' potential future in Hollywood
Next Page