Cameroon will investigate their own players after match-fixing accusation

The claims have been made in a German newspaper...

Some controversial news this morning as officials from the Cameroon FA are to investigate claims that seven of their player were involved in match-fixing during their World Cup campaign in Brazil.

The investigation has come about after a known match fixer from Singapore made the allegation in a German newspaper which led to the Cameroon FA releasing the following statement:

END_OF_DOCUMENT_TOKEN_TO_BE_REPLACED

"Recent allegations of fraud around Cameroon's 2014 Fifa World Cup three preliminary games, especially Cameroon versus Croatia, as well of the 'existence of seven bad apples [in our national team]' do not reflect the values and principles promoted by our administration, in line with Fifa's code of conduct and the ethics of our nation.

"We are strongly committed to employ all means necessary to resolve this disruptive matter in the shortest delays." 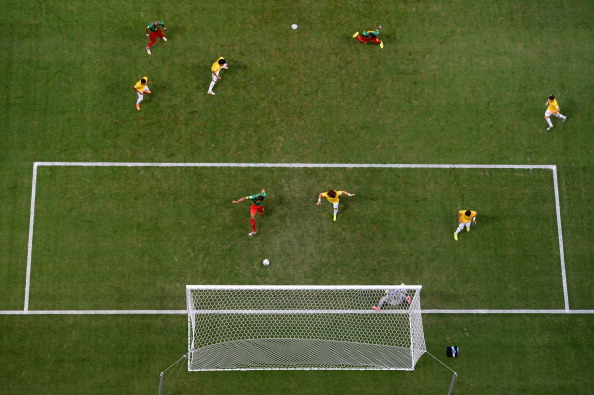 FIFA did not comment as it didn't want to "compromise any possible investigations" but they did add this: "Speaking generally, the integrity of the game is a top priority for FIFA and as such we take any allegations of match manipulation very seriously."

Cameroon were beaten in their three group games against Mexico, Croatia and Brazil and were involved in one of the craziest games of the tournament when two of their own players attacked each other against Croatia.

popular
QUIZ: Can you name all the counties in Ireland without the letter 'E'?
WhatsApp introduces way to choose who can and can't see you're online
Nearly 100 flights delayed at Dublin Airport on Monday
QUIZ: Can you get top marks in this short but tricky Irish geography quiz?
RTÉ tries to solve Michael Collins murder in new documentary
Netflix has just added an incredibly tense 97-minute thriller
QUIZ: Can you name all the counties in Ireland with an ‘N’ in their name?
You may also like
4 days ago
The JOE Friday Pub Quiz: Week 306
6 days ago
Rebekah Vardy breaks down in tears in first TV interview since Wagatha Christie defeat
1 month ago
Gary Lineker says he suffered racist abuse during football days due to "darkish skin"
2 months ago
Merseyside police defend ‘exemplary’ Liverpool fans tear gassed by French police
2 months ago
BBC trainee accidentally posts message mocking Man United live on TV
2 months ago
Kurt Zouma charged with three animal welfare offences
Next Page