The sum was raised in just two days.

Celtic fans have raised well over £100,000 (approximately €116,475) for Palestinian charities in the wake of a UEFA charge for waving Palestinian flags during a Champions League qualifier last week.

UEFA charged Celtic for the presence of an “Illicit banner” in the first leg of their Champions League qualifier with Hapoel Be'er Sheva in Celtic Park after fans waved a number of Palestinian flags during the 5-2 win.

END_OF_DOCUMENT_TOKEN_TO_BE_REPLACED

The case against Celtic won’t be heard until September 22 and the club are expected to incur a fine of approximately £15,000.

A campaign, labelled #matchthefineforpalestine was subsequently launched by Celtic fans and a gofundme page was established with the intention of matching the fine issued by UEFA and donating it to two charities, Medical Aid Palestine (MAP) and the Lajee Centre, a Palestinian cultural centre in Aida Refugee Camp on the outskirts of Bethlehem. 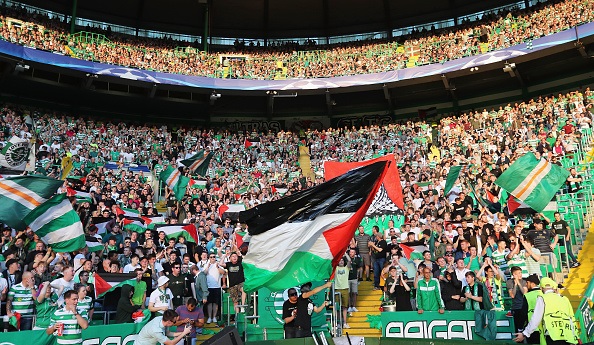 At the time of writing, hours before the return leg with Hapoel Be'er Sheva in Be’er Sheva, £106,645 had been raised by Celtic fans, just two days after the page had been set up.

END_OF_DOCUMENT_TOKEN_TO_BE_REPLACED

Celtic fans, meanwhile, have been warned by Israeli police not to wave Palestinian flags during the second leg.

“Obviously it won’t be allowed – that is for sure, Israeli police spokesman Micky Rosenfeld told The Daily Record.

“The flags would of course be taken off them. “This is a professional football game and not a political opportunity.

“In terms of the football game, it’s not going to add to the atmosphere and might start up tensions which could lead to other issues. Our aim is to prevent any incidents from taking place as a result of any unnecessary provocative behaviour by any of the fans.

“There will be security measures implemented to prevent those sorts of incidents from taking place. It is not illegal to have a Palestinian flag in Israel but provocation by fans of either side is, and we will not tolerate it.”