The Champions League is coming to FIFA 19

EA revealed the cover for the upcoming FIFA 19 game at EA's press conference on Saturday night.

The news comes after UEFA confirmed its long-running partnership with Konami – the Japanese entertainment and gaming conglomerate which saw the Pro Evolution Soccer series exclusively hold the competition for a decade – had come to an end.

The next version of the football game will feature Cristiano Ronaldo and Neymar, both donning their club's new kits.

Two champions on one cover. Only on the #FIFA19 Champions & Ultimate Edition 👉https://t.co/ykq6t3EdJZ pic.twitter.com/K6Z9OTxEL8

FIFA 19 will also feature the UEFA Champions League with full licensing, as opposed to past versions which have had to make do with calling it the Champions Cup and have not been able to use the official music for the most prestigious club competition.

Watch the official trailer for the new game below. 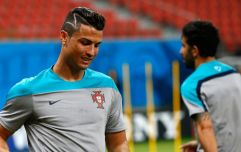 END_OF_DOCUMENT_TOKEN_TO_BE_REPLACED

EA recently released a free to download World Cup mode for FIFA 18, which allows gamers to play as any of the nations competing in this summer's tournament.

Sorry to any Italians out there...