A look back at the action in the Premier Division and First Division...

It was a brilliant night for Dundalk and they didn't even kick a ball as the Premier Division league leaders' two nearest rivals both dropped points.

Second place Cork City lost 2-0 away to Bohemians at Dalymount Park. A first-half goal from Steven Beattie and an 80th minute goal from Eoin Wearen was enough to clinch all three points for Bohs who worked their socks off all night and really restricted City going forward.

END_OF_DOCUMENT_TOKEN_TO_BE_REPLACED

The result will come as a blow to City's title aspirations but they are still in good shape, level on points with Dundalk having played an extra game. Meanwhile, the result moves Bohs into the sixth place in the table just two points behind Sligo Rovers.

The game was overshadowed somewhat by a serious looking head injury picked up by Cork City full-back Brian Lenihan, we wish Brian well and hope he's back on the pitch very soon. 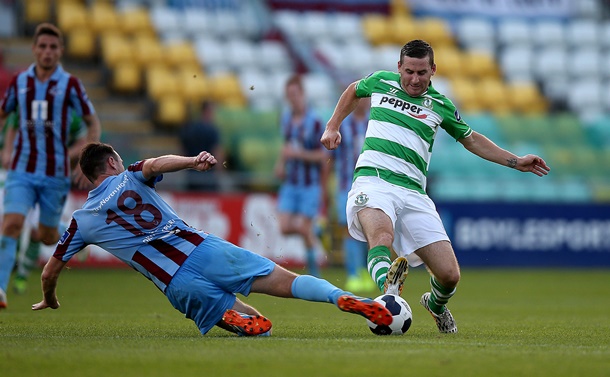 Shamrock Rovers also lost ground on Dundalk tonight as they lost 1-0 at home to Drogheda United. Gavin Holohan grabbed the only goal of the game for Drogs who leapfrog Limerick into 8th place. The result leaves Rovers six points behind Dundalk in third place and they've played an extra game.

popular
Man dies after being attacked by newly calved cow in Mayo
Status Red warning issued as Storm Barra closes in
The JOE Movie Quiz: Week 131
Majority of employers will require employees to visit office on weekly basis
Next pandemic could be "more contagious or more lethal" says vaccine creator
QUIZ: Can you get full marks in this General Knowledge Quiz?
QUIZ: Do you reckon you can get 15/15 in this General Knowledge Quiz
You may also like
1 month ago
The JOE Friday Pub Quiz: Week 264
3 months ago
Manchester City's Benjamin Mendy charged with four counts of rape
4 months ago
Michael Ballack’s son Emilio, 18, dies in 'quad-bike crash’
4 months ago
Five football documentaries to watch to kill time before the new Premier League season
5 months ago
Christian Eriksen shares first update from hospital as he undergoes tests after cardiac arrest
5 months ago
Christian Eriksen stable but may not play football again, says sport cardiologist
Next Page