Ahead of the big one at Twickenham this weekend, we caught up with Ulster and Ireland flanker for a quick chat about Saturday's clash with England, what's it like to work under Joe Schmidt and Peter O'Mahony's singing voice.

When it emerged that the unfortunate shoulder injury that Sean O’Brien suffered over Christmas would rule him out of the Six Nations, a mood of gloom descended on Irish rugby fans.

As arguably our most influential player, some suggested that the loss of O’Brien would scupper any hopes Ireland had of winning the Six Nations and though Ireland are never short of a back-row forward or two, it was hard not to think that his absence could prove decisive.

END_OF_DOCUMENT_TOKEN_TO_BE_REPLACED

Thankfully, it hasn’t proved an issue so far as Ulster’s Chris Henry has proved a more than able deputy in the number seven shirt. Outstanding for his province in their pursuit of glory on two fronts this season, he has carried that form into his performances with Ireland and on Saturday will make his twelfth appearance in a green jersey against England in what feels like Ireland’s biggest game in years.

Ahead of the game and just before a trip to the cinema (where he was off to watch Dallas Buyers Club) Chris was good enough to take time to talk to us about the England game, having to bide his time with Ireland, working under Joe Schmidt and Peter O’Mahony’s own personal version of the Irish national anthem that has attracted an awful lot of attention in recent weeks.

JOE: How have preparations been going for England so far, is there a confident mood in the camp ahead of Saturday?

Chris Henry: Yeah, it’s been very much like the first few weeks to be honest, it’s been going really well. At the start the preparations were really intense which was great because there’s great clarity to the game plan and how we’re going to go about it and this week has been no different. Everyone’s working really hard and although it’s only Wednesday at this stage everyone pretty much knows how we’re going to approach the game at the weekend.

END_OF_DOCUMENT_TOKEN_TO_BE_REPLACED

JOE: Have you been impressed by what you’ve seen of England so far and what sort of challenge do you think they’ll present this weekend?

CH: It’s going to be our biggest challenge yet, there’s no hiding that. I think in our performances against Scotland and Wales we’ve gradually got better and this is going to be another step up and that’s pretty obvious. I think they’ve been the same, they’ve been getting better and better, they were very unlucky against France not to finish it off but they’ve still got so much to play for.

It’s a huge game for both sides, any Ireland v England game is huge, we’ve seen that in the Six Nations in the past. This is going to be the big test and with so much at stake and the chance to win something it’s a really exciting week.

JOE: Not that we want to be putting any pressure on or anything but would you count this as the biggest game of your career so far?

END_OF_DOCUMENT_TOKEN_TO_BE_REPLACED

CH: Without a doubt it’s definitely the biggest game of my career. I’ve played in a few finals and won a Churchill Cup but apart from that I haven’t won any silverware, so the chance to win a Triple Crown is something I’ve definitely thought about and there are a few players in the same boat as me so if I’m selected (he has been selected) it’s going to be a massive opportunity and an exciting prospect.

JOE: You’re 29 now Chris and it’s probably the first time in your career that you’re getting an extended run in the Ireland first team. Were you worried that you were going to miss the boat as far as playing regularly for Ireland was concerned?

CH: I don’t know if I was worried, it was a goal of mine to get as many Ireland caps as possible but I never thought I’d get to 12 (Saturday will be his 12th appearance for Ireland) to be honest so any time I get opportunities I really enjoy it because you don’t know how long you’re going to be there for.

In my position there is a lot of competition out there, there always has been and there always will be because Ireland seems to breed all these back rowers! For me, whenever a coach gives me an opportunity, I try and give it my all and maybe because I’m a bit older I’ve been really going out to enjoy myself, to play with a smile on my face and to get stuck in and hopefully I’ve shown that in the last two games and if I get more opportunities I’ll be doing exactly the same.

JOE: As you said, there is massive competition for places in the back row but do you feel that you’ve something a bit different to offer in that you’re probably more of a traditional seven than others fighting for the position?

CH: Everybody has their own strengths and weaknesses and hopefully in the last two games Joe has seen that I can provide something and help the team from my position. You look at the names also competing for it, the likes of Tommy O’Donnell, Jordi Murphy, Rhys Ruddock, the list goes on and on and a lot of young lads are pushing as well. I think we all knew that with Sean injured there was an opportunity there and fortunately Joe thought I played well enough to give me a chance. 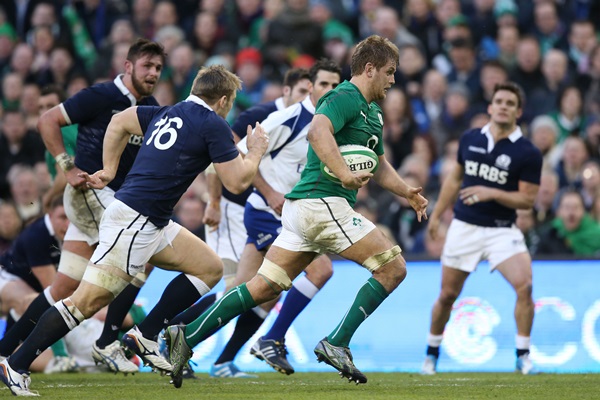 Henry leading the charge against Scotland

The competition always keeps you on your toes but it brings the best out of you as well and it’s the same in most of the positions in the team at the moment. If you look at the subs and the players coming in off the bench they’ve made a big impact and I think the impact they have made has been really important in the last couple of games.

JOE: A lot of players have spoken positively about what it’s like to train and play under Joe Schmidt so far. What has your experience of him been and what would you say is the biggest difference between him and other coaches you have played under?

CH: I just think working with Joe has been unbelievable. He’s definitely a first for me in the way he approaches a game, he demands an awful lot of players but the thing is, he’s very honest and you sort of know that if you do what he wants you to do and reach the goals and targets he’s set that he’s going to get the best out of you.

Watching opposition videos and the way teams play, he knows how to beat teams and there’s no doubt, you can see why Leinster have been so successful. If he can replicate that with this group then hopefully there’s something special building.

JOE: Speaking of video sessions, he has a reputation for showing no mercy as far as they’re concerned. Have you experienced the sharp end of the stick yet?

CH: Yeah, well he’s not afraid to say if someone’s done something and he’ll definitely pull you up on it. The two video sessions I’ve been involved in I’ve been quite nervous going in but luckily I’ve sort of dodged a few things!

Look, he’ll always come up to you, even in training if you do something small in regards to not hitting the right breakdown or slight angles of adjustment, small details, he comes up and tells you. It might be first thing in the morning but he’ll tell you and then get straight into the job and get it done and that’s what you want from a coach, to push you and to keep you on your toes. 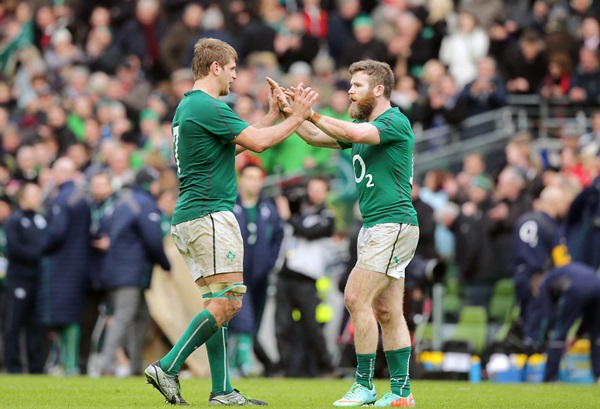 Celebrating with Gordon 'The Beard' D'Arcy against Wales

You know that he notices everything and that brings the best out of you because you don’t want to be the one who lets him down and lets the team down.

JOE: A quick word on Ulster Chris, you were the best performing team in the pool stages of the Heineken Cup and Ulster are pretty experienced when it comes to the business end of competition. Would it be fair to say that Ulster have never been as well-equipped to win it as you are this year?

Saracens at home, although we have home advantage, it’s going to be a huge task but if you ask any of the players, you always have to go into tournaments with belief and we have. We’ve achieved the goal of the home quarter-final we were really pushing for and on any given day, who knows what can happen?

CH: Haha, I was thinking ‘where on earth is this question going?’ but you know, I’m purposely going to go and try and find him on the pitch because although I’ve heard him singing on tour, I’ve never heard him sing on the pitch although I know he’s been getting a lot of stick for it, so I’ll try and get closer in the future.

JOE: If you do, wear ear plugs. Thanks a lot for talking to us Chris and all the best at the weekend.

CH: No problem, thanks very much.

popular
New car-free town with population of 85,000 set to be built in Dublin
Here's how to make €9-11 on Revolut in just a few minutes
Galway City Council street cleaners claim Lotto jackpot worth over €5.5 million
Elderly Irish man stabbed to death on mobility scooter in London
QUIZ: Can you name all the countries beginning with A?
Articulated lorry driver in his 20s dies in Tyrone
A terrific '90s crime drama is among the movies on TV tonight
You may also like
4 months ago
Scottish Parliament official dies during rugby game in Dublin
5 months ago
Every Guinness fan needs to try these brand new experimental beers
6 months ago
"Samaritans saved my life" - Brent Pope praised for honest interview on Tommy Tiernan Show
1 year ago
Craig Casey and Johnny Sexton combination backed for Italy clash
1 year ago
Defence grows for Billy Burns after one of the roughest days of his rugby career
1 year ago
Major upside to Ireland's Six Nations challenge that should make all the difference
Next Page