We imagine this will make the folks at UEFA a little miffed.

According to reports, FIFA are planning a new, annual Club World Cup, which would see 24-clubs compete in a 14-day tournament held every year.

BBC Sport reported seeing documents, which are to be discussed at length at a FIFA meeting on Friday, with the Annual World Cup to take place every July and/or August, as opposed to December as it does now. 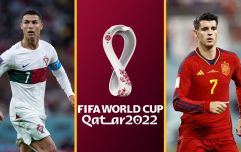 END_OF_DOCUMENT_TOKEN_TO_BE_REPLACED

The Club World Cup as it currently exits is held every December and features seven teams from six confederations. The initial plan to expand the number of teams to 24 (including 12 from Europe) also included making it a once-every-four-years tournament, which has now been revamped to a yearly tournament.

Some of the early details revealed so far include the fact that some clubs may have to play 5 matches in just 14 days with as little as 48 hours between games.

According to the BBC report, the European Club Association (ECA), which represents Europe's biggest teams, has opposed the plans, as have the World Leagues Forum, which represents 38 professional leagues including the Premier League, La Liga and Serie A.