The store adopted the motto "Still Choosing to Stand, Just Doing It", referencing Kapernick's decision to kneel during the National Anthem.

During the summer, Nike revealed that Colin Kaepernick would be the face of one of their biggest campaigns of all time.

The NFL player, who controversially chose to kneel during the National Anthem to protest police brutality, was made the face of the 30-year anniversary of Nike's 'Just Do It' campaign. 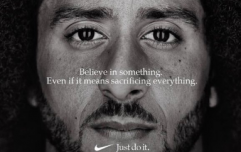 END_OF_DOCUMENT_TOKEN_TO_BE_REPLACED

The campaign was unveiled, accompanied by the caption: "Believe in something. Even if it means sacrificing everything."

Following the release of the initial ad, people began to boycott Nike products in protest with some even going as far as burning Nike clothing... which they'd already bought.

And it looks like the boycott had an effect, just not necessarily the one that they had been hoping for.

A sports shop in Colorado, America has closed down, following a boycott of Nike goods.

Owner of Prime Time Sports, Stephen Martin, posted on Facebook on Monday announcing a closeout sale with all merchandise marked 40 percent off.

"Thank You for 21 mostly good years. For everybody that has offered help and support through the "Honor The Flag" memorial wall and NIKE boycott, now is your time to help me liquidate."

Kapernick is still without a club in the NFL, which many believe to be due to the controversy that would follow him if he were to sign for a team.

popular
These are the 27 new Marvel movies and shows coming in 2021 and beyond
The hardest Line Of Duty quiz you'll ever take
QUIZ: Can you score top marks in this random European trivia quiz?
Everything you need to know about the Indian variant of Covid-19: How the vaccine will affect it and its presence in Ireland
The JOE Movie Quiz: Week 98
Morrissey calls The Simpsons "racist" after showing him with his "belly hanging out"
The 50 most iconic songs of all time* have been revealed
You may also like
2 months ago
Nike release first pair of hands-free runners
7 months ago
QUIZ: Do you know the names of these classic trainers?
1 year ago
Nike has created a pair of shoes specifically for nurses, doctors and other health workers
1 year ago
WATCH: Irish filmmaker directs brilliant new Nike ad
2 years ago
Nike unveil new self-lacing shoes that are operated via smartphone
2 years ago
Nike stocks drop 2.9% in wake of Kaepernick deal
Next Page