CONFIRMED: Gary Neville will be back on Sky Sports this season

Sky Sports has confirmed that former Manchester United defender Gary Neville will return as an analyst and co-commentator for the 2016/17 season.

Neville left Sky when he took the manager’s job at Valencia last season, a spell that ended disastrously when he was sacked after just 10 wins in 28 games in less than four months in charge.

END_OF_DOCUMENT_TOKEN_TO_BE_REPLACED

Reports linking Neville with a return to Sky Sports surfaced a number of months back and the news was confirmed on Sunday morning, with Neville set to join Thierry Henry, Jamie Carragher, Jamie Redknapp and Graeme Souness on the Sky Sports team.

Monday Night Football fans may end up being slightly disappointed, however, as Sky say that he will join Jamie Carragher for “guest appearances” on the show. 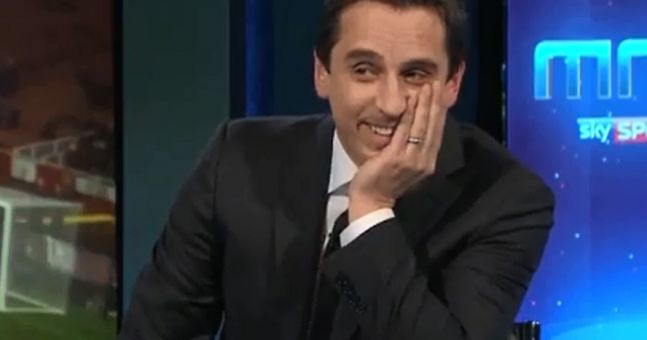 END_OF_DOCUMENT_TOKEN_TO_BE_REPLACED

That would seem to suggest that he will appear on an occasional basis as opposed to being a firm fixture on the show with Carragher, as used to be the case.

In a statement, Neville said that he was delighted to be back with Sky Sports, albeit in a “slightly different” role to his previous stint.

"I am delighted to be rejoining Sky Sports and can't wait for the start of the new football season, especially as there will be a variety of new programming on the channel.

"It is important for me that my role will be slightly different, and I am looking forward to the challenge of working on some new, creative and exciting projects."

Even if it might not be the same as before, as arguably the best football pundit on TV, it’s good to have him back.

popular
The JOE Friday Pub Quiz: Week 307
A great underseen action thriller is among the movies on TV tonight
Netflix has just added an incredibly tense 97-minute thriller
Thunderstorms and heavy rain to end Ireland's current heatwave
Record for hottest August day in Ireland ever has now been broken
Anne Heche dies one week after car crash, aged 53
An exciting Irish crime thriller is among the movies on TV tonight
You may also like
13 hours ago
Disney+ has just added 10 big movies to its library
1 day ago
Breaking Bad and Better Call Saul creator reportedly has next new show lined up
1 day ago
The new Love Island and 8 more new movies & shows to watch this weekend
2 days ago
WATCH: House of Hammer details the alleged crimes of award-winning actor Armie Hammer
2 days ago
Prime Video has just added 25 very big movies to its library
3 days ago
5 must-watch shows and movies streaming on NOW in August
Next Page