The two-time European Champion has decided to call it a day...

One of Ireland's most successful athletes, David Gillick, has announced his retirement from the sport today. The highlight of the sprinter's career was winning two successive European Indoor 400 metre Gold medals, Madrid in '05 and Birmingham in '07.

The Dubliner, who is an Irish record holder at the 400 metre distance, also represented his country at the Beijing Olympics in 2008 and competed at world level at outdoor and indoor level over the last 10 years. 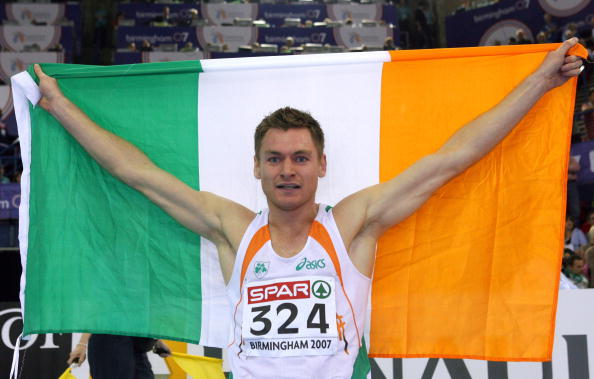 David Gillick is the new ambassador for the Johnston, Mooney and O'Brien sandwich thins range.

popular
Amazon Prime Video has just added 38 very big movies to its library
Mia Khalifa claims seaside town is better than Miami
The 50 most iconic songs of all time* have been revealed
5 must-watch shows and movies streaming on NOW in December
The start of the superhero takeover of Hollywood is among the movies on TV tonight
Did you spot the explosive detail in the latest episode of The White Lotus?
21 jokes that are so bad they're actually brilliant (but still quite bad)
You may also like
4 years ago
WATCH: Usain Bolt has scored his first goals in professional football
4 years ago
Think you could handle this 83km adventure race across Killarney?
4 years ago
"I knew I could pick him off" — Thomas Barr gives deadly post-race interview
4 years ago
Watch the moment Thomas Barr wins bronze in 400m hurdle at European Championships
4 years ago
Roger Bannister, the first man to run a four-minute mile, has died aged 88
4 years ago
Irish athletics star dies in car crash on Valentine's day
Next Page