How did Floyd Mayweather Jr think he was going to get away with this?

There was something a little different about the third leg of the Mayweather vs. McGregor world tour. 'Money', on tape at least, gives away a couple of inches to McGregor but the pair were looking eye to eye at the Barclays Center [sic]. 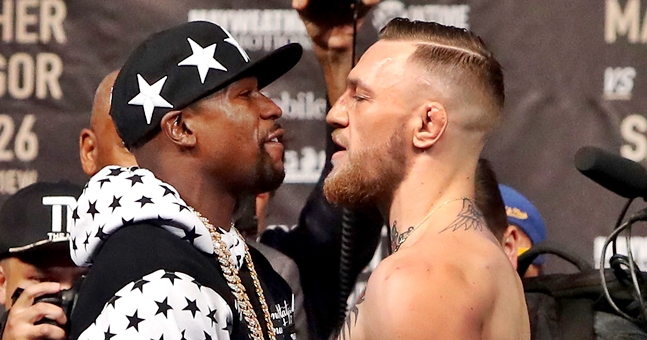 Where did the 40-year-old's growth spurt come from?

As it turned out, Mayweather was hardly coy about disguising how he gave himself a boost:

Yesterday's presser I thought "Conor isn't that much bigger than Floyd"

But then I seen Floyds shoes 🙈 😅

John Kavanah, McGregor's coach, went in for a closer look and was far from impressed.

We all need a little lift sometimes pic.twitter.com/iXabnibJdb

They're like something Marty McFly may have brought back to the 1980s when he rammed into 2016 at 88mph and shocks of flame.

There was no way McGregor was letting that slide when the pair clashed for the final time at London's SSE Arena, on Friday night. 'The Notorious' mocked Mayweather for the antics and made a fantastic point:

"You should have worn them [shoes] on the first day, you stupid, baldy twat!"

END_OF_DOCUMENT_TOKEN_TO_BE_REPLACED

Perhaps Mayweather had been surprised at McGregor's height when looking back on the photos for the first two legs of the tour.

He could have been a bit more discreet about cheating a couple of inches but discreet is not his style.

Now, where can we get a pair of sweet kicks like that?

popular
Katherine Ryan says famous TV star is a ‘predator’ and everyone in industry knows
20 years ago, one of the best sci-fi movies of the 21st century was a box-office bomb
The JOE Movie Quiz: Week 181
Man fired for not being "fun" at work wins legal battle, nobody has to be fun now
The JOE Friday Pub Quiz: Week 322
I'm A Celeb public outcry after Matt Hancock makes it into the final
A beloved sports documentary is among the movies on TV today
You may also like
3 weeks ago
Conor McGregor slammed for Halloween photo of mum in 'black face'
3 months ago
Conor McGregor to make film acting debut in Road House remake
2 years ago
Conor McGregor responds to Paschal Donohoe’s calls to encourage social distancing amongst Irish public
3 years ago
"I was in the wrong" - Conor McGregor apologises over incident in Dublin pub
3 years ago
Charges dropped in Conor McGregor phone-smashing case
3 years ago
WATCH: New footage released of Conor McGregor allegedly smashing fan's phone in Miami
Next Page