It looked as though summer was here. If it was, it's gone again.

We've all been caught out in heavy showers while playing our favourite sports. More often than not, you need help peeling your jersey off at the end of the game before flinging it in a sodden heap in the corner of the changing room.

A forward for Dungiven GAA didn't fancy that prospect one bit, on Sunday, as the heavens opened during his reserve league match.

Maybe he'd tough it out for the seniors but this was the reserve league, for God's sake. 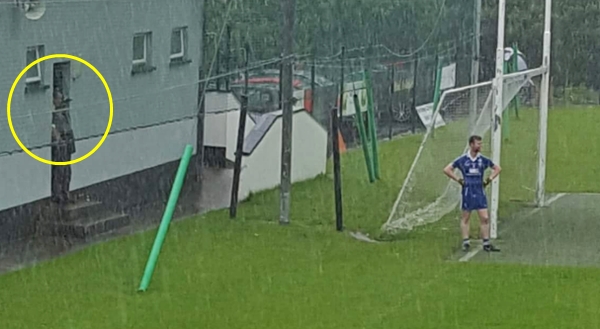 END_OF_DOCUMENT_TOKEN_TO_BE_REPLACED

We love the reaction of his non-plussed marker.

Surely he was half tempted to following his man off the pitch to the one spot in Derry that was saturated.

popular
Budget 2023: Cigarettes going up, energy credits announced, child and social welfare increases confirmed
Two new 24-hour bus services are coming to Dublin
CONFIRMED: Renters to benefit from €500 tax credit as part of Budget 2023
An underseen disaster film is among the movies on TV tonight
Female child and woman in critical condition after incident in Clare
Female child discovered with serious injuries in Clare
Jeffrey Dahmer’s dad thinks he knows what’s to blame for son becoming a serial killer
You may also like
5 years ago
A fiery Dick Clerkin team talk left Jeff Stelling more pumped than the players
5 years ago
Chris Kamara attempts a 45, ends up pulling hamstring and clocking a tractor
5 years ago
Join The GAA Hour in Westport for a Mayo-Kerry preview in the company of legends
5 years ago
Jeff and Kammy witness one of Mícheál Ó Muircheartaigh's greatest ever lines
5 years ago
Chris Kamara tries to pronounce Mícheál Ó Muircheartaigh... you know the rest
5 years ago
Promo for Jeff Stelling and Chris Kamara's Journey to Croker looks unreal
Next Page