Cristiano Ronaldo has agreed a deal to join Juventus

Real Madrid have agreed to let the Portugese player leave.

Juventus will pay €100m for the Portugese striker, who turned 33 in February.

Real Madrid confirmed the transfer in a statement on Tuesday evening. 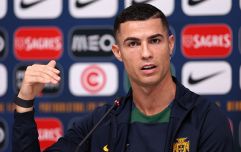 END_OF_DOCUMENT_TOKEN_TO_BE_REPLACED

He is set to sign for the Italian side just weeks after being knocked out of the World Cup.

Ronaldo himself got off to a brilliant start in the tournament, scoring an incredible hat-trick against Spain, but had an extremely disappointing end after being knocked out by Uruguay in the last 16.

Juventus themselves have had quite a successful recent history, having won the past 7 Serie A titles. 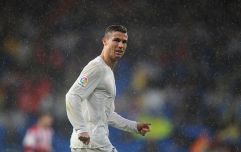 END_OF_DOCUMENT_TOKEN_TO_BE_REPLACED

In recent years they've failed to win the CL with Ronaldo often inflicting the damage.

In April, Ronaldo scored a stunning bicycle kick in a 3-0 victory against Juve.

The goal in question led to the Juventus fans awarding Ronaldo a standing ovation, which is a sight we may well get used to seeing.

Ronaldo himself has penned a letter to the Madrid fans, thanking them for the time he spent.

popular
Met Éireann updates weather warning for entire country as temperatures set to fall to -6
Céline Dion diagnosed with incurable neurological disease
The "eighth best movie ever made" is among the movies on TV tonight
5 deadly destinations for a last-minute city break this winter
Jennifer Lawrence sparks controversy by saying she was the first woman to lead an action movie
Star of Horrible Histories says cast arguably did 'blackface' by getting spray tans to play Egyptians
15 years ago, one of the greatest scenes of the 21st century arrived in cinemas
You may also like
3 weeks ago
QUIZ: JOE's Big News Of The Day Quiz #12
1 year ago
Young fan Ronaldo gave his jersey to has another dream come true
1 year ago
FAI confirms young fan Ronaldo gave his jersey to "will not face any fine"
1 year ago
Young fan Ronaldo gave his jersey to reveals what he said to her
4 years ago
EA Sports appears to remove Cristiano Ronaldo from FIFA 19 promotional images
4 years ago
Cristiano Ronaldo firmly denies rape allegations made against him in new statement
Next Page