Italian distance runner Devis Licciardi will hope the allegations prove to be a load of cock and balls, but as you might expect from a story involving a fake penis, it doesn’t look good.

According to the Daily Telegraph, 27-year old Licciardi is accused of using the fake organ to insert ‘clean urine’ into a sample he was asked to provide following a 10km race in Molfetta in Italy at the weekend.

Licciardi, who had hardly been setting the world alight with his performances this season, allegedly told a doctor on the scene that he would “like to be alone” but was refused because the doctor's attendance was required in accordance with anti-doping laws. 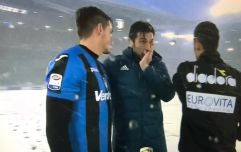 END_OF_DOCUMENT_TOKEN_TO_BE_REPLACED

The incident was immediately reported to Italian anti-doping officials and if found guilty, Licciardi will be banned for two years and perhaps even worse, will be known as the guy who was banned for using a fake penis to try and cheat a drugs test.

What is perhaps even more shocking than the fact that Licciardi used the fake penis is that a number of brands of the manufactured organs are available on the internet, they come in different colours to suit a person’s skin colour and some even contain heat pads in an effort to make the so called ‘urine’ released from the product that bit more convincing.

It can’t be denied that Licciardi went to extraordinary lengths to try and deceive the officials but as it turned out the fake penis wasn’t worth a… trip to the bank to pay for it.

popular
Budget 2023: Cigarettes going up, energy credits announced, child and social welfare increases confirmed
Two new 24-hour bus services are coming to Dublin
An action horror classic is among the movies on TV tonight
CONFIRMED: Renters to benefit from €500 tax credit as part of Budget 2023
An underseen disaster film is among the movies on TV tonight
Female child and woman in critical condition after incident in Clare
Jeffrey Dahmer’s dad thinks he knows what’s to blame for son becoming a serial killer
You may also like
1 month ago
Massive 130ft superyacht sinks off the coast of Italy
1 year ago
Unverified temperatures of 48.8C reported in Sicily, possibly the highest ever recorded in Europe
1 year ago
Employee at Italian hospital accused of skipping work for 15 years
2 years ago
Ancient Roman mosaic floor discovered underneath vineyard in Italy
2 years ago
Italy announce the lifting of travel restrictions from June
2 years ago
Italian Prime Minister says the EU could collapse due to Covid-19 outbreak
Next Page