There were dozens of contenders but ahead of the All-Ireland Final this weekend, JOE decided to don our tin hat and select our top five Dublin players since their second most recent All-Ireland success in 1995.

The history of Dublin football is littered with some legendary and storied individual talents and when you think of the men who distinguished themselves in the blue jersey over the years, names such as Heffernan, Rock, Bernard Brogan senior, Mullins and more instantly spring to mind.

Looking ahead to this weekend’s All-Ireland Final meeting with Mayo, however, we decided to look at the more recent history of both sides and the players who have stood out in the past two decades or so.

END_OF_DOCUMENT_TOKEN_TO_BE_REPLACED

Using the teams that have represented Dublin since their second last All-Ireland title in 1995 and Mayo teams since 1989 – the first time the men in green and red had appeared in a final in 38 years – as reference points, we picked out who we think have been the top five performers for both counties in that timeframe.

We’ll get to the Mayo men tomorrow but first up are the Dubs and with eight Leinster titles claimed since 1995 and a whole host of All-Stars to choose from, it wasn’t easy to pick five men above the rest.

Names of the stature of Paul Curran, Dessie Farrell, Jason Sherlock, Barry Cahill and of a more recent vintage, Paul Flynn, were unlucky to miss out but below, in no particular order, are our top five Boys in Blue in the last 18 years.

END_OF_DOCUMENT_TOKEN_TO_BE_REPLACED

From Paddy Cullen to John O’Leary, Dublin are lucky to have had some of the best goalkeepers to have ever played the game between the sticks and Cluxton has already earned the right to be mentioned alongside those legendary figures due to his exploits for the Dubs over the last decade.

To add to his eight Leinster titles and solitary All-Ireland triumph, Cluxton has also received four All-Star awards and while he is a good shot-stopper and solid under the high-ball, he has practically turned kick-outs into an art form thanks to his laser-like accuracy as well as becoming one of the most reliable free-takers in the game.

Undoubtedly the best goalkeeper since the turn of the millennium and will deservedly go down as one of the all-time greats.

END_OF_DOCUMENT_TOKEN_TO_BE_REPLACED

Rory O’Carroll has been a great servant in recent years but for a long time following the retirement of Paddy Christie Dublin struggled to fill the full-back position and those who tried to fill the role were always going to find it hard to replicate the impact of the Ballymun beast.

Christie’s best years came at a time when the so-called smaller fry in Leinster enjoyed a purple patch in the province at the turn of the millennium but he did win three Leinster medals before hanging up his boots and earned a cult following amongst Dublin supporters due to his commanding presence at the edge of the square and his ever-evident heart on his sleeve approach.

A lot of fine footballers have gone through their careers without an All-Ireland medal but Whelan is deserving of an awful lot of sympathy considering that he made his Championship debut the year after Dublin won an All-Ireland in 1995 and called it a day the season before they bridged a 16-year gap when claiming Sam Maguire again in 2011. 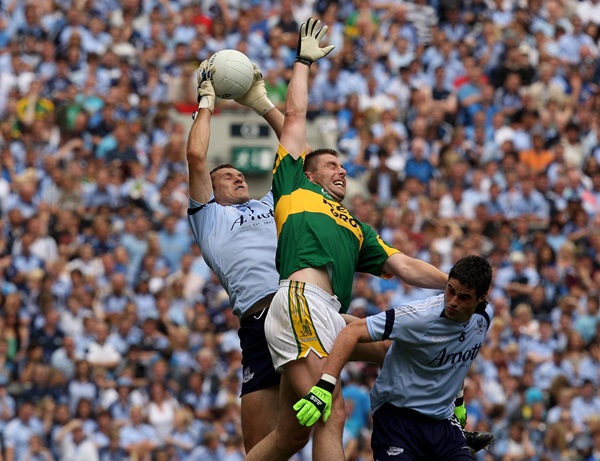 In the period in between he was arguably the best midfielder in the country, combining brilliant fielding ability with strength, power and a devastating scoring threat.

We possibly shouldn’t feel too sorry for Whelan as he won six Leinster Championship medals and two All-Stars in his Dublin career, during which he was probably the only high-profile inter-county outfield player to consistently wear goalkeeper gloves.

Alan Brogan hasn’t been missed as much as might have been expected this season and certainly not as much as he was at times last year, but as recently as 2011 he was voted as Footballer of the Year and is up there with the likes of the Gooch, Peter Canavan and Steven McDonnell as the best forwards of the last decade.

At one stage he was Dublin’s scorer-in-chief but when his brother assumed that role he adapted seamlessly to the role of playmaker at the heart of the Dublin attack, consistently delivering quality ball that he himself would have thrived on when he was stationed closer to goal.

Brogan has eight Leinster titles to his name as well as an All-Ireland title, a Footballer of the Year award and three All-Stars and hopefully we haven’t seen the last of him at the highest level yet.

When they’re older, Bernard and Alan can argue amongst themselves about who was the best Brogan of them all and they can even get their Dad involved in the debate as well but the success of his elder sibling and his father certainly hasn’t burdened Bernard from forging a hugely successful inter-county career in his own right.

Having been threatening to do so all this season, he finally came to life in the All-Ireland semi-final against Kerry when he kicked four points from play and will be the man that the Mayo defence will be most focussed on stopping this weekend.

Bernard started out his inter-county career as a wing-forward and was nominated for an All-Star in the position in 2007 but he has thrived since moving into the inside line, never more so than when winning the Footballer of the Year award in 2010 despite Dublin not making the final that year.

A good performance in the final may just land him a third All-Star award and possibly a second All-Ireland title to go with the six Leinster medals he already has in his pocket.

popular
Dublin Bus and boat involved in city centre collision
County where winning Lotto jackpot ticket worth nearly €9 million was sold confirmed
Welder awarded €15,000 for unfair dismissal despite admitting to drinking alcohol before work
10 years ago today, the scariest movie ever made (according to science) was released
Netflix has just quietly added 30 big movies to its library
Here's the line-up for this week's episode of The Late Late Show
Graham Norton reveals the one celebrity he'd love to have interviewed
You may also like
1 day ago
Fifth male juvenile arrested in connection with ramming of Garda vehicle in Cherry Orchard
3 days ago
Four male juveniles arrested in connection with ramming of Garda vehicle in Dublin
1 week ago
Two arrested over accommodation fraud scheme in south Dublin
1 week ago
Man armed with knife arrested after making threats to shop staff in Dublin
1 week ago
National Transport Authority apologises to passengers for "poor reduction in service performance"
1 week ago
Two new 24-hour bus services are coming to Dublin
Next Page