The back door has been slammed shut, and we're down to knockout football among the best eight teams in the country. Footballing heaven awaits...

Last week, we didn't exactly put our necks on the line but we went with the four favourites, excluding the usual 'there's always one upset' thought from our minds. And while London, Meath and especially Galway almost derailed the form book, the four expected sides; Cavan, Cork, Tyrone and Donegal, joined the provincial winners in the last eight.

That has set us up very nicely in eircom's Win, Lose or Draw game, which you too can take part in by clicking on this link and entering the code CTYVG, but we have a fear that this weekend's games will be much tougher to call.

But undaunted, we'll give it a shot once again and if you don't like our picks then we have the very knowledgeable eircom ambassadors on hand to give advice too.

First up is the all-Ulster clash between Tyrone and Monaghan. Mickey Harte’s team beat Monaghan in the 2007 and 2010 Ulster finals but both teams have evolved. Tyrone are not the powerhouse they once were, while Monaghan, under Malachy O’Rourke, are a very astute outfit now with some fine attacking talent.

But we saw last week that Tyrone are the masters of eking out tight games. They have Sean Cavanagh playing at 2008 levels and with another All-Ireland just 210 minutes away, Tyrone could be too wily for their Ulster rivals.

Harte was effusive in his praise of Monaghan, saying: "Monaghan have the template to beat Donegal and they have the confidence to go with it. That’s not just something they brought on the day. I think their football championship has been based on defending solidly while attacking in droves at pace. I don’t think they’ll change their basic template for us because it has brought them success. I expect them to play with a huge intensity and plenty of people behind the ball to break at pace. They have good men inside to give the ball to as well."

It is hard to disagree with Harte but we still think that Tyrone will have too much. All the eircom ambassadors agree, except for Ciaran Whelan, who fancies the Ulster champions, and Michael Murphy, who has faced both teams this year, who thinks it will be a draw.

END_OF_DOCUMENT_TOKEN_TO_BE_REPLACED

The biggest crowd of the year should be in for this one, the meeting of the two big city teams. Dublin had their feathers ruffled by Meath but got the job done in Leinster while Cork have yet to fully convince, with their performances marked by uneven showings by key men and the team being out of sorts until the reinforcements arrive from the sideline.

On paper, the Cork panel might be the only one to compete with Dublin in terms of depth but it seems Conor Counihan has yet to get the most out of his resources. They are too ponderous in attack and perhaps not tight enough at the back.

Dublin could exploit this perfectly, and they will drive at the likes of Graham Canty from the first whistle. Neither side has shone at midfield, but that may not matter as both deploy the short kickout. Possession will be key in this game but it seems to us that one team, Dublin, know what to do when they have it and the other, Cork, often don’t.

END_OF_DOCUMENT_TOKEN_TO_BE_REPLACED

All the eircom ambassadors agree, plumping for a home win, bar Mickey Harte, who fancies the Rebels. It’s one of those weekends when there will be lots of different opinions, but only one winner.

A clash that harks back to the 1940s and 1950s and one that will be eagerly awaited by the modern generation too, especially the massive travelling Cavan fanbase. They turned up in huge numbers last week to watch them beat London by nine points, so the chance to have a lash at Kerry will surely draw even more.

It should create a great atmosphere but most of us will be watching to see how Kerry are looking. Rumour has it they are in sensational form in training and they didn’t have to do too much to see off a rudderless Cork in the Munster final.

Cavan will know that they must marshal Colm Cooper at centre forward and hope to stymie the Kingdom threat there but the speed of Darran O’Sullivan (below), and Declan for that matter, plus the return of Kieran Donaghy as a direct option, could be one or two weapons too many. 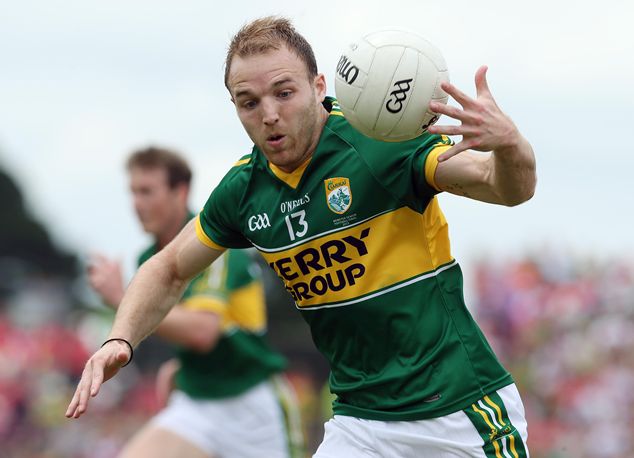 Cavan have some firepower too, namely Martin Dunne, Cian Mackey and Eugene Keating (if he can forget his nightmare miss last week) while in David Givney they have one of the best midfielders in the game. The Breffni have the ability to contain Kerry, at least for a while, and we expect them to keep in touch for a while, but the Kingdom need to lay down a marker that they are serious Sam contenders, and this is the stage to do it on.

And in case any Cavan fan was getting too cocky, read this by Colm Cooper: "It’s back to Croke Park. It’s a place I love playing more than anywhere else in the country. I always get excited about heading for Dublin. Heading for the big time. The body is in good shape and the fact that I’ve had a change in position has helped me transform my game. Playing at centre forward has given me that extra bit of hunger and desire for this year." Sounds like he means business.

All the ambassadors plump for Kerry too. We won’t disagree.

Undoubtedly the biggest game on a massive weekend at HQ. The fires have been stoked hugely for this game, and with both fans already eager for another go at each other, this one could be a right handful for referee Joe McQuillan.

However, the balance has shifted since last September. The Donegal machine, while not exactly spluttering, is misfiring just a tad. Mayo's appears to be even more highly tuned and increasing in speed.

The probable absence of Mark McHugh, and the slow return of Karl Lacey, are other mountains for Donegal to climb, while James Horan’s side are fighting fit and have a greater depth on the bench too.

Donegal killed off the All-Ireland final early with two quick goals but they haven’t been near a goal since the end of May against Tyrone. Mayo have been racking up monster scores, though they will find far less space on Sunday than they did against Galway, Roscommon and London. That confidence in front of goal, though, and chance-creating ability, will see them home on Sunday.

"The mindset was very positive after the Ulster Final defeat and we got stuck into it straight away on the Monday night. Every team in the last 8 will tell you there’s room for improvement and we’re no different. We’re under no illusions of the task ahead but we’re happy with the response since the defeat in Clones.

"Mayo have been one of the most consistent teams in Ireland over the last number of years. They’ve had a lot of success and they’re absolutely flying this year. Every team in the last 8 will be thinking about trying to put their best foot forward. They were a massive challenge last year in the All Ireland final but that was last year. There will be a lot made of it this week but we’re only concentrating on the present and that’s all we can do.  Mayo are on a high whereas we’re looking to improve as best we can. It’ll come to a head on Sunday and the best team will stand out on the day.

"Last year is last year. There’s a hell of a lot of water under the bridge since then. Maybe it’s a boring answer but it’s the cold heart of the fact that we’re just looking to focus on our own game."

Tellingly, two ambassadors pick Donegal (Harte and Murphy) and the rest go for Mayo. We won’t rock the boat either.

popular
Amazon Prime Video has quietly added 18 big releases to its library
Here's where all the 149 tickets that won €36,687 in Saturday's Lotto were sold
That Nic Cage film everyone is talking about is finally available to watch at home
Gardaí appeal for information on man in black tracksuit as part of Ashling Murphy murder investigation
QUIZ: Can you name all the US states with a smaller population than Ireland?
The JOE Movie Quiz: Week 137
NPHET to consider lifting restrictions on working from home and hospitality this week
You may also like
2 days ago
Chapters Bookstore announces closing date after 40 years in business
4 days ago
213-bed four-star hotel and rooftop restaurant at the centre of new Clerys Quarter
5 days ago
Six teenagers arrested following car chase in Dublin
1 week ago
A man has died after a shooting in Dublin
1 week ago
Dublin bar ranks as 3rd "most mysterious" in all of UK and Ireland
1 week ago
Two teenagers arrested in connection with Ballyfermot assault
Next Page