Wikipedia has rightfully recognised one of the best names for a GAA match in years, while a famous Monaghan man who might have been in Croker tomorrow is predicting big things from the Farney Army.

A practise the GAA marketing gurus could do with borrowing from other sports is attaching a title to the big games in order to create a bit of buzz and a little extra interest than what might be already there, like ‘El Clasico’ or the ‘Old Firm’ in football or ‘The rumble in the jungle’ in boxing.

END_OF_DOCUMENT_TOKEN_TO_BE_REPLACED

The perfect opportunity to do just that arose a few weekends back when it was confirmed that Tyrone would play Meath in the final round of the qualifiers and considering that both teams wear the logos of crisp companies on their jerseys, the brilliant title of ‘El Crispico’ was born.

Considering it has been quoted often of late it is hard to determine who exactly came up with the name, but we think our very own Sean Nolan has a very strong case for its conception, having posted the following tweet minutes after Tyrone defeated Kildare last month to set up a clash with Mick O’Dowd’s side.

Regardless of who came up with it, we can all agree that it is a great title, so great in fact that it has been referenced in the Wikipedia page belonging to this year’s All-Ireland Senior Football Championship. 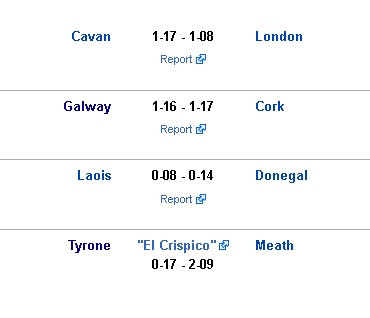 END_OF_DOCUMENT_TOKEN_TO_BE_REPLACED

Unless it has been hijacked, Wikipedia is normally very matter of fact – particularly on a results and stats based page like this one – and wouldn’t tolerate the use of humour like that but we think this is a genuine move on their part in this case and fair play to them for doing so.

Could it start a trend? We certainly hope so and welcome any suggestions for like-minded titles involving any two counties you like to Facebook, Twitter and the usual channels.

END_OF_DOCUMENT_TOKEN_TO_BE_REPLACED

Monaghan haven’t been talked up as All-Ireland contenders as much as, for example, Dublin, Mayo, Kerry and Donegal, but after seeing what they did to the reigning All-Ireland Champions in the Ulster Final, there is a growing number of people who think that the Farney Army can go all the way.

One of those people is former Emyvale and Monaghan underage footballer turned Ulster, Ireland and Lions rugby star Tommy Bowe, who has been impressed with what he has seen so far from his county men, some of whom he has shared a GAA field with in the past.

“I know a few of the Monaghan payers,” Bowe told Gaelic Life.

“I know the Corey brothers, Stephen Gollogly, Dessie Mone and a few others from my generation. There are a lot of young fellows coming through and playing very well but there are still a few boys my age there.

“They definitely have shown the potential over the last couple of years although I think hardly anybody would have forecast they would beat Donegal in the way that they did in the Ulster final.

“It was amazing and the people of Monaghan are absolutely over the moon about it. It is wonderful for the county. They played with a fierce intensity and that is what they will need against Tyrone this weekend.”

Peter Canavan has arguably been the most high-profile supporter of Malachy O’Rourke’s men so far and Bowe takes particular satisfaction in having his own opinion validated by one of the game’s all-time greats.

“With someone of the calibre of Peter saying that, I am not one to doubt him,” Bowe added. “I would definitely back that up.”

While it would have been nice to find out what Bowe could have achieved playing Gaelic Football for his native county rather than rugby for his province and country, it also would have been interesting to hear the take of Marty Morrissey, Ger Canning or Darragh Maloney on Ryle Nugent’s excitable cries of ‘Tommy Boooooooowe’ in a Gaelic Football arena.

Thankfully, however, there’s a more than suitable alternative currently in the Farney ranks if any of the lads mentioned above want to give it a try before the end of Monaghan’s championship campaign.

popular
James May reportedly hospitalised after crashing into wall at 75mph filming new show
Disney+ has just added 10 big movies to its library
An exciting Irish crime thriller is among the movies on TV tonight
Netflix has just added an incredibly tense 97-minute thriller
QUIZ: You'll need to be razor-sharp to get 100% in this General Knowledge Quiz
The JOE Friday Pub Quiz: Week 307
A great underseen action thriller is among the movies on TV tonight
You may also like
1 month ago
Looking for a hotel room for the All-Ireland Final weekends? It won't come cheap...
1 month ago
Taoiseach condemns "disturbing" fight at Galway v Armagh game
2 months ago
The 2 Johnnies share unbelievable catfish ordeal affecting over 40 people
3 months ago
Limerick hurler arrested following alleged altercation with Tipperary player in Limerick pub
3 months ago
Woman in her 20s dies after accident during Camogie match
10 months ago
Wicklow GAA to investigate fight after Under 15 match on Saturday
Next Page