Europa League trophy stolen in Mexico ahead of semi-finals

The incident took place on Friday.

Next week will see the semi-finals of the Europa League, as Arsenal take on Athletico Madrid and Red Bull Salzburg tackle Marseille, but in the lead-up to those matches, the Europa League trophy was doing a bit of a world tour.

It was during this tour that the trophy was actually stolen. 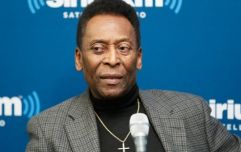 END_OF_DOCUMENT_TOKEN_TO_BE_REPLACED

During a sponsor's event on Friday in Leon, the biggest city in the central Mexican state of Guanajuato, the trophy was stolen.

The UEFA stated that the "Europa League trophy was in Mexico for a partner event and got briefly stolen. It was quickly recovered and has suffered no damages."

Local authorities claim that the trophy was taken in a vehicle, but it was not taken for a long period of time.

No further details of those who stole the trophy have yet been released.

The final of the Europa League, and the winners holding up the the recovered trophy, will take place on Wednesday 16 May in France.

popular
The 50 most iconic songs of all time* have been revealed
Amazon Prime Video has quietly added 10 big new movies to its library
Clint Eastwood's final western is among the movies on TV tonight
The JOE Movie Quiz: Week 130
The best memes from this year's Late Late Toy Show
The Toy Show DJ brothers have been offered their very first gig
QUIZ: Name the films referenced by The Simpsons
You may also like
1 week ago
Police issue warning over CCTV footage of Liverpool bomb explosion
1 month ago
TikTok star arrested for murdering wife and man could face death penalty
1 month ago
9.2 million illegal cigarettes seized at Dublin Port by detector dog
2 months ago
Men arrested trying to cross New Zealand border with boot full of KFC
2 months ago
Gardaí investigating after woman seriously assaulted by a man in Westmeath
2 months ago
Gardaí investigating tragic death of man aged in his 50s at Cork GP clinic
Next Page