La Liga is on its winter break, and so it's time to sit back and take stock of exactly how things are shaping up so far. Will the title race turn into a three-horse affair, or will it be the same two dukeing it out come the end of the season? Who's in the race to stay in the Primera and try to avoid the drop to the Liga Adelante, and have fortunes turned around for a few clubs who had a poor start to the year? JOE's resident La Liga and European football fanboy/hipster takes a look through the division. Missed Part I or Part II? Check out the first one here and the second one here.

END_OF_DOCUMENT_TOKEN_TO_BE_REPLACED

It's almost been a tale of two seasons for Real Sociedad already this year, and after a disastrous Champions League campaign, things seem to be back on track. As soon as it was clear that their European adventure was over for the year, their domestic form picked up in a very dramatic way, and they began to look like the team that we saw last season that qualified for the Champions League. Over the summer however, they refused to spend the money they'd garnered from the sale of Asier Illarramendi or their Champions League campaign, and they were paying the price for that lack of investment early on.

After Real Madrid handed them a shellacking at the Bernabeu, where it would not have been unreasonable to start to fear for their safety in the league, they have gone on a run of four wins and have been fairly free scoring, which they showed in their 5-1 win over Betis. Former Arsenal man Carlos Vela has been in great form scoring eight goals, but also creating a fair share for his team mates, including Antoine Griezmann, who is once again on the radar of Europe's biggest clubs as he continues to show his brilliance. One thing we love about Vela is that he's refused to let his fondness for a softly dinked finish ever be trained out of him.

Sociedad currently sit in fifth place in the table, which looked highly unlikely when they were sliding down the standings during the first two months of the season. They start back to La Liga action against local rivals Athletic in a huge game this weekend, and have one injury worry in the form of Xabi Prieto, who pulled up in training earlier this week. He has also been a fixture in this squad and is undoubtedly a key piece of the puzzle, so in a game which could have serious ramifications on the race for Europe, that might be a big out for them.

The southerners have been grabbing headlines for the wrong reasons in recent weeks after their president José María Del Nido was sentenced to seven years in jail after being found guilty of embezzlement. A good start to 2014 then... 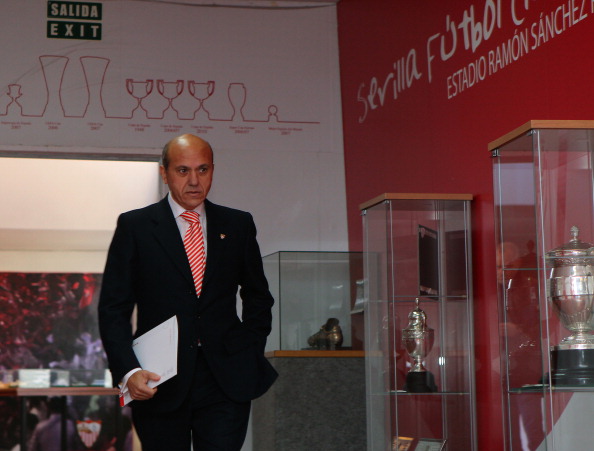 END_OF_DOCUMENT_TOKEN_TO_BE_REPLACED

On the pitch, results have been decent under Unai Emery, and despite a fairly freak result against Real Madrid where they lost 7-3, the balance has seemed to work. Their squad has some talented players like on loan Chelsea player Marko Marin, Iván Rakitic, and the young Portuguese pair of Diogo Figuerias and Daniel Carriço but 2013 really has been the year of Alberto Moreno. The 21-year-old left back has risen from the youth squad to the first team, and is a fixture in Emery's first XI, but the highlight was definitely his call up to Del Bosque's Spain squad in October against Georgia, which speaks to the level at which he's playing. He also notched a pretty decent goal against Athletic just a few weeks ago too.

Carlos Bacca and Kevin Gameiro have been helping themselves to goals up front, and the Colombian commented on there being a great spirit of healthy competition, helping to push both players to their highest level. The two have 13 goals between them, and seem to be working well together. An important 2-1 win over Villareal before the break sees them sitting in seventh, and they start back against the team directly below them in the table, Getafe, who are also playing well, which should be a great game.

The Singaporean businessman Peter Lim may be in line to take over the club from the current owners, the banking conglomerate Bankia, and unburden them of all that pesky debt that has seen them sell their best players in every transfer window. The offer is described by the club president, Amadeo Salvo, as 'the best solution for all parties' according to Marca, but hasn't stated exactly how much the deal is worth. The rumours on that front range from between €350-€400 million, which would wipe the debt, have money left over for their new stadium to be built and some spare change to strengthen the squad should the deal all go through before the close of the window. 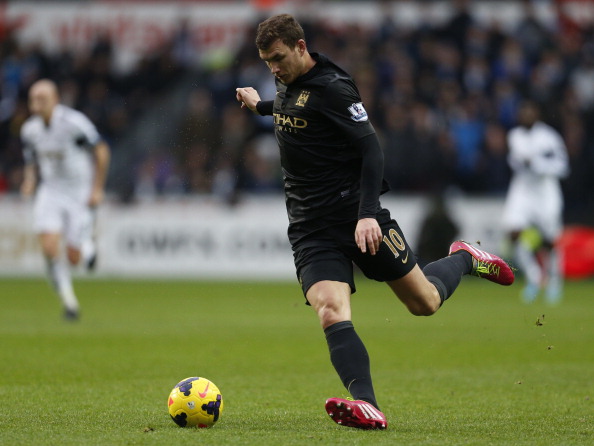 END_OF_DOCUMENT_TOKEN_TO_BE_REPLACED

Lim sees plenty of potential in Valencia and a whole host of names are already being linked to the club (including Edin Dzeko), despite the fact that the deal hasn't been sealed yet. It's difficult to see it going through and everything being in place before the end of the window, but there have already been some changes, as Juan Antonio Pizzi is the new man in charge of the team after Miroslav Djukic got the sack last month. He arrives from Argentina with a trophy in the bag having won the Torneo Inicial with his San Lorenzo side (the Pope's favourite team) in the middle of December. 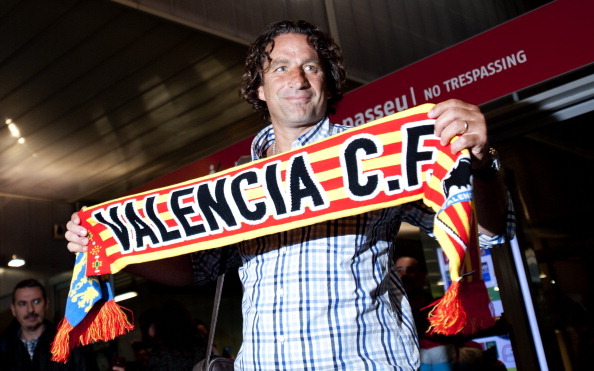 If reports are to be believed, 18-year-old Ángel Correa of San Lorenzo may be following his manager over from Argentina too, having had a very strong season and shown that he's got great potential. Results under Djukic had seen the team slip down the table, with their away form leaving a good bit to be desired and the goals drying up a bit. While they are in the relative safety of midtable, they are only five points off the drop, so it will be a baptism of fire for Pizzi, who takes on Levante in a derby as his first game in charge.

As ever, Banega (pun intended) has been in good form, keeping the ball moving and cycling possession through midfield, a highly underrated skill that he does tremendously well. Brazilian striker Jonas is the man who they depend on for goals, and has hit the ground running this season with eight so far. There are other talented players in this squad however, such as Sergio Canales, Oriol Romeu and an aging but still lethal Hélder Postiga, so if they can hit their stride with a new man in charge, Valencia may be able to push on a little bit further. They certainly proved that they can lift their game when needed, as they showed in their narrow defeat to Real Madrid, pushing the giants almost to the final whistle.

Perching dangerously above the relegation zone at Christmas, Valladolid only sit outside the drop on goal difference, which is not where you want to be at any stage of the season. Manager Juan Ignacio Martínez stated in his first press conference of the New Year that he wants his team to change their mindset after their defeat against Espanyol before the break and get focused on staying in the league with a strong start to 2014. The beginning of the season held little joy for Valldolid who could only muster three wins, so they will hope to turn over a fresh leaf in 2014.

Another cause for concern is the contract situation that a good few of their players find themselves in, and with ten players out of contract in the summer free to negotiate with other clubs as of New Year's day, this January window could leave them very short staffed if those members of the squad go looking for some permanency elsewhere. Their biggest worry will be Javi Guerra, who is their leading goalscorer with 11. Were he to end up on another club's shopping list, the rest of the team may struggle to find the back of the net, considering that their next highest scorer, Patrick Ebert, has three. He too is out of contract in June, but his very impressive record of seven yellow cards and one red card already this year in just 12 games might put a few suitors off. 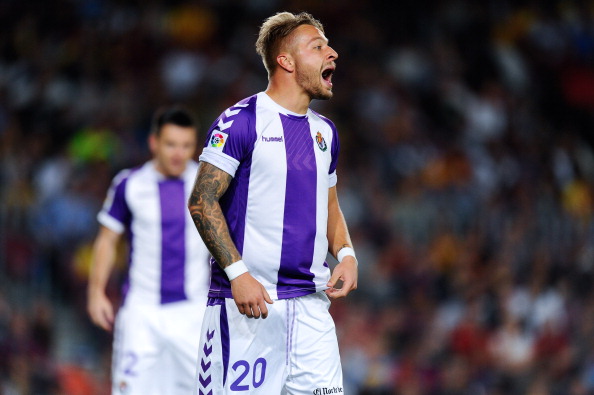 They return to action against another side who find themselves at the wrong end of the table in Real Betis, and although it's a bit of a cliché, this could have a slight 'cup final' element to it. Betis have seen a change of manager before the break, and the time off may have done them the world of good, not to mention that Valladolid are expected to be without Patrick Ebert, Heinz Barmettler, Gilberto Alcatraz and Óscar González for the game. While a few draws against mid-table sides such as Málaga and Sevilla has suggested that the addition of a little bit of quality in the attacking third could really help Valladolid to pull clear of trouble, this weekend's game may be very telling when the table is finalised at the end of the season.

Having just returned to the Primera, not too much was expected from this Villareal side, but they have surprised quite a few with their form and the type of football that they're playing. The break may have just arrived at the right time for the submarino amarillo as they went into their holidays with two defeats on the trot, but given that they were games against Barcelona and Sevilla, that might not be such a huge surprise. 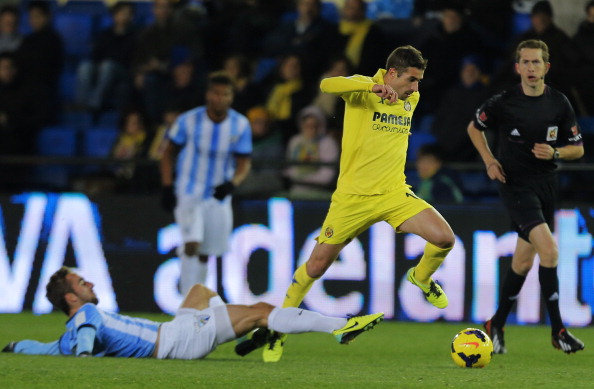 Looking through their squad, however, the reasons for their current form become a lot more obvious. Former Real Zaragoza great Cani stuck with the side through the drop to the Liga Adelante, but he has shown this season that he belongs in the top flight with his range of passing. Mateo Musacchio, the young centre-back at the heart of their defence, looks to be a world class talent and his list of suitors grows longer by the day. Club president Fernando Roig put a hefty price tag of €50 million on him earlier this week though, so we don't expect him to move too soon. Giovanni Dos Santos looks to have finally found a settled club environment and is clearly enjoying his football as he is the team's top scorer with six, including this lovely goal in their impressive 4-1 win against Valencia.

They return to action against Rayo, but then face the team who sits above them in the table, Real Sociedad. A win would be huge, but they might feel that they're overly familiar with them by February, as they have to play the side from San Sebastián three times in the coming weeks between league and cup fixtures.

popular
WATCH: This foul-mouthed argument proves the Irish language is alive and well
Amazon Prime Video has quietly added 18 big releases to its library
60 jobs available on Stena Line with 50% of your time spent not working
Man charged in connection with the murder of Ashling Murphy
WATCH: Prime Video reveals teaser trailer for its epic Lord of the Rings series
A gripping '90s thriller is among the movies on TV tonight
QUIZ: We bet you can't name all of these countries from their outlines
You may also like
3 months ago
The JOE Friday Pub Quiz: Week 264
4 months ago
Manchester City's Benjamin Mendy charged with four counts of rape
5 months ago
Michael Ballack’s son Emilio, 18, dies in 'quad-bike crash’
5 months ago
Five football documentaries to watch to kill time before the new Premier League season
7 months ago
Christian Eriksen stable but may not play football again, says sport cardiologist
9 months ago
Martin Compston reveals moment he delayed Line of Duty filming to watch Scotland penalty shoot-out
Next Page