Goalkeepers have made a huge impression on FAI Cup Finals in the recent past and Drogheda’s Michael Schlingermann will be hoping he’s hitting the headlines for the right reasons this weekend.

There surely aren’t many who can claim to have played in an All-Ireland minor football final and in an FAI Cup Final but Drogheda United’s Michael Schlingermann will achieve that unique distinction, if, as expected, he lines out between the sticks for the Drogs on Sunday.

Schlingermann, who was born in Ireland to German parents, is well known in Mayo GAA circles having appeared on the Mayo minor side that lost to Armagh in the 2009 All-Ireland final, a team that also featured two-time Young Footballer of the Year and current Mayo senior star Cillian O’Connor.

Michael managed to keep a clean sheet on the day in Croke Park, as he did in a phenomenal performance in the semi-final win over Down, when the RTE panel were amongst the many to sing his praises afterwards. 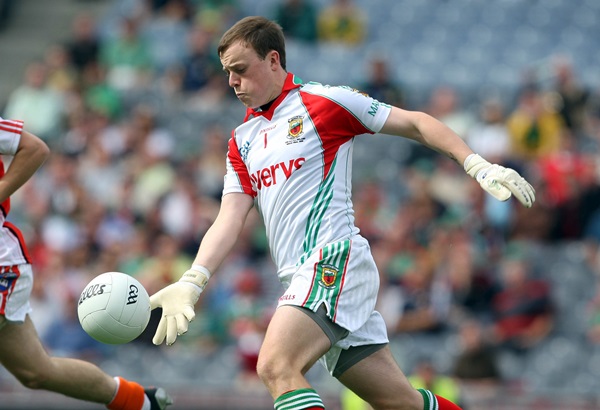 END_OF_DOCUMENT_TOKEN_TO_BE_REPLACED

He was back in Croke Park playing outfield for his local GAA club Kiltimagh in the All-Ireland Junior Football Final in 2010, but again he was on the losing side as Kerry side Castlegregory emerged victorious after extra-time.

END_OF_DOCUMENT_TOKEN_TO_BE_REPLACED

While GAA featured prominently in his sporting upbringing, soccer was Michael’s number one priority and despite only turning 22 in the summer, he lined out for Monaghan United, Athlone Town and, the club he will face on Sunday, Sligo Rovers, before joining Drogheda last season.

Schlingermann moved from Sligo to Athlone Town in 2010 and then from Athlone to Monaghan in January 2012. After six months with Monaghan – and starring when they knocked back to back champions Sligo Rovers out of the FAI Cup in 2012 – he moved to Drogheda in June of last year. All the while, Schlingermann was representing Carlow IT with distinction during his time in college and he acted as skipper for the Irish Colleges team last year.

For the majority of his time with the Drogs, Schlingermann has had to play second fiddle to Gabriel Sava, but having been given his chance at the tail end of this season he has grabbed it with both hands and made the number one position his own in recent matches.

Given Sligo’s massive favourites tag, Schlingermann is likely to be under the cosh at the Aviva on Sunday afternoon but you don’t have to look too far to recall the last goalkeeper with a background in Mayo GAA who made a name for himself on the biggest stage in Irish domestic football.

Whether Schlingermann can repeat the penalty-saving heroics of former Sligo netminder Ciaran Kelly remains to be seen, but we reckon he’d be happy enough with a winner’s medal in his pocket come Sunday evening.