The team investigating Tuesday's attack on the Borussia Dortmund bus are examining the possibility that it could have been carried out by a far-right group.

A report in Der Tagesspiegel, a Berlin-based daily newspaper, has claimed that it received an email on Thursday in which the author, who is anonymous, describes the attack on the bus as a 'final warning'. As well as this, the email mentions Adolf Hitler and criticises multiculturalism.

Three explosions caused windows to shatter on the bus as the Dortmund team made their way to their Champions League quarter final first leg against Monaco at Westfalenstadion. 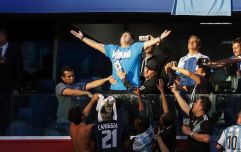 END_OF_DOCUMENT_TOKEN_TO_BE_REPLACED

Although Marc Bartra was treated in hospital for an injury to his wrist, nobody was seriously injured in the incident.

However, when speaking to a journalist the following day, team captain Marcel Schmelzer explained how the discovery of nails in coach headrests had brought home how close those on the coach came to losing their lives.

Investigators looking into the explosion had found three copies of a note containing Islamic rhetoric at the scene, but the possibility that this may now have been used as a diversion is now being looked into.

popular
QUIZ: How will you fare in our ‘Not as it seems’ quiz?
Video: So what exactly did John Terry say to Anton Ferdinand?
Can you get top marks in Week 57 of JOE's 19 in 90 quickfire quiz
QUIZ: How well do you remember the final season of Game of Thrones?
The full list of all the new titles coming to Netflix in December
QUIZ: Can you answer all the £1 million questions from Who Wants to be a Millionaire?
Principal of Carlow school denies claims female students were asked not to wear tight leggings to school
You may also like
20 hours ago
Tributes pour in after Diego Maradona dies aged 60
1 day ago
PS5 controller trigger will tighten to indicate player fatigue on FIFA 21
1 week ago
Megan Rapinoe admits 'teasing the English is such a pleasure'
1 week ago
Ryan Reynolds and Rob McElhenney's takeover of Wrexham AFC approved
2 weeks ago
Enjoy a 'Super Sundae' with a €10 No-Lose Bet on Liverpool v Man City with BoyleSports
3 weeks ago
Ryan Giggs denies assaulting his partner following arrest
Next Page