WATCH: Pep Guardiola replies with 'What da f**k?' when asked if Man City can win quadruple

Manchester City are riding high. Pep Guardiola has somehow managed to instill his trademark playing philosophy into his new charges in a remarkably short amount of time, as the Blues have notched up a maximum 15 points from their first five games.

The football is exquisite too, with City looking in total command of each game. They are fluid and creative in attack, whilst tenacious and perfectly organised when lacking possession. All this with Kevin De Bruyne working his magic upfront. 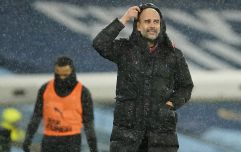 END_OF_DOCUMENT_TOKEN_TO_BE_REPLACED

Such has been their dominance in the first few weeks of the season that it has let to some wondering whether the side can manage unprecedented feats this season. Forget merely winning the league, can they match Arsenal's 'Invincibles'?

But Guardiola isn't interested in such hype, in fact he detests it with a passion. Not only is he concerned about heaping pressure on his players and himself, but he's acutely aware of the media's habit of building you up to knock you down.

So when he was asked about City's chances of winning the quadruple this season (Premier League, Champions League, FA Cup and League Cup) he wasn't impressed. Rather he made his dismay perfectly apparent with a sweary retort...

"What da fuck..." he exclaimed under his breathe, before sighing heavily and replying with the standard soundbites. Brilliant.

Q: is the aim to win four trophies?
A: WTF pic.twitter.com/CbF3ifT4rt

popular
Met Éireann issues Status Yellow rain warnings for five counties
Met Éireann issues weather warning for three counties
Paul Reid announces decision to step down as HSE boss with a "heavy heart"
Kendrick Lamar closes Glastonbury with blood-soaked plea for women's rights
QUIZ: Can you conquer this delightfully difficult General Knowledge Quiz?
Rental availability at "extraordinarily low level" as house prices continue to rise
Aer Lingus apologises for multiple cancelled flights to and from Dublin Airport
You may also like
10 months ago
Manchester City's Benjamin Mendy charged with four counts of rape
2 years ago
Here's how to get tickets to Coca-Cola's last Premier League roadshow
2 years ago
They're making a cartoon show about Manchester City for some reason
3 years ago
QUIZ: How good is your memory of the Manchester derby?
3 years ago
The Football Spin on Maurizio Sarri's problems and have Chelsea handed Manchester City the title?
3 years ago
The Football Spin on Chelsea transforming the title race, is it Liverpool’s year and the rise of Troy Parrott
Next Page