Jerry Flannery and Kevin McLaughlin on The Hard Yards

No holding back here...

The lads preview the upcoming Champions Cup action and give fascinating insights to the mentality around, and preparations for, back-to-back European fixtures. Flannery [from 58:00] also fires back at some recent criticisms Alan Quinlan made about Munster.

"I don't think that just having played for Munster gives you any sort of insight," he said. "You have to prepare for the games." 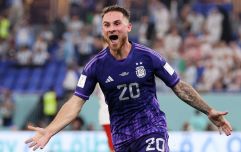 END_OF_DOCUMENT_TOKEN_TO_BE_REPLACED

McLaughlin's tale of being made drink far too much Pernod by French hooker William Servat is worth the listen alone!

END_OF_DOCUMENT_TOKEN_TO_BE_REPLACED

2:00 - Jerry reminds us he was a Hard Yards founding member
3:30 - Jerry and Kev recall their experiences together for Ireland
7:00 - Kev's bleary night in Paris and William Servat's Pernod measures
9:00 - The pros and cons of being a versatile player
16:00 - Forwards that started out as backs
20:30 - Champions Cup preview
25:30 - The perils of playing back-to-back games
28:30 - Rugby World's Alan Dymock on player migration
46:00 - Our Champions Cup predictions
51:30 - The lads answer your Twitter questions
55:00 - Jerry responds to some of Alan Quinlan's recent comments

popular
Amazon Prime Video has just added 38 very big movies to its library
The Banshees Of Inisherin is arriving on Disney+ sooner than you might expect
U2 drummer Larry Mullen Jr. says band may perform without him in 2023
The 50 most iconic songs of all time* have been revealed
Mia Khalifa claims seaside town is better than Miami
Dissection of a woman's body to be shown on Channel 4 tonight in TV first
These are the 10 funniest jokes according to research
You may also like
17 hours ago
We could be getting snow this Thursday, according to Met Éireann
1 day ago
Ireland sees '100% success rating' with four-day work week trial
5 days ago
These are the 10 most-watched YouTube videos in Ireland in 2022
3 weeks ago
Ireland named as one of the winners at world travel ceremony
1 month ago
Nine cities and towns to benefit from support package aimed at creating "more vibrant nightlife"
1 month ago
Moving abroad this year? You might be able to claim some very handy tax back...
Next Page