At this point we're going to have to stop calling it 'retirement'.

The highest paid athlete of all time claims that he is coming back one last time, for one last fat pay-cheque.

Money Mayweather's last fight was against Ireland's own Conor McGregor (UFC fighter from Dublin, ever heard of him?), and he won with relative ease. 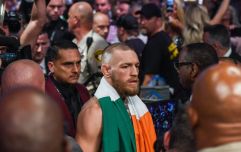 Conor McGregor vs. Manny Pacquiao has just got one step closer

END_OF_DOCUMENT_TOKEN_TO_BE_REPLACED

He also made a stupid amount of money while doing so.

Since then, McGregor and Mayweather have shared a couple of light jabs on social media, but not enough for us to assume that they'll ever fight again.

It seemed like Floyd was comfy in his retirement, but not anymore...

The 41-year-old took to his Instagram on Saturday to announce that he would be coming out of retirement to fight Manny Pacquaio, claiming that "another 9-figure payday is on the way".

I’m coming back to fight Manny Pacquiao this year. Another 9 figure pay day on the way @mayweatherpromotions

The two fought already in 2015, where Mayweather won after a points decision.

The fight was heavily criticised by fans who felt both parties were too conservative in their approach.

Maybe the sequel will be different...

popular
One of Keanu Reeves' best movies has just been added to Netflix
"Clear as daylight" that unvaccinated people are a risk to themselves and others - Taoiseach
Met Éireann issues Orange weather warnings for five counties ahead of Storm Barra
QUIZ: Do you reckon you can get 15/15 in this General Knowledge Quiz
A terrific crime thriller is among the movies on TV tonight
The JOE Movie Quiz: Week 131
QUIZ: Can you get full marks in this General Knowledge Quiz?
You may also like
5 years ago
Manny Pacquiao has apologised for making offensive comments about homosexuals
5 years ago
People are outraged over Manny Pacquiao's latest comments on homosexuality
6 years ago
Video: Jamie Foxx explains why his national anthem rendition was so, so terrible
6 years ago
Floyd Mayweather's fight earnings seem even more obscene when broken down to the second
6 years ago
This Facebook user can't understand why everyone was praising Mayweather
6 years ago
Video: You wouldn’t want to get in the way of Manny Pacquiao when he’s doing this…
Next Page