After what was an ultimately disappointing Superbowl last night, many American Football fans took some consolation in the fact that at least Floyd Mayweather lost a lot of money. Well, it turns out he didn’t.

The man known as Money was trending worldwide last night during Superbowl 48 as with the Seattle Seahawks so dominant in a game they would go onto win 43-8, fans wanted something else to talk about, or, more specifically, to take the p*ss out of Mayweather (see below) for betting as much as €13 million dollars on the Broncos to win ($10.4 million to win, $2.6 million to be leading at half-time, according to reports). 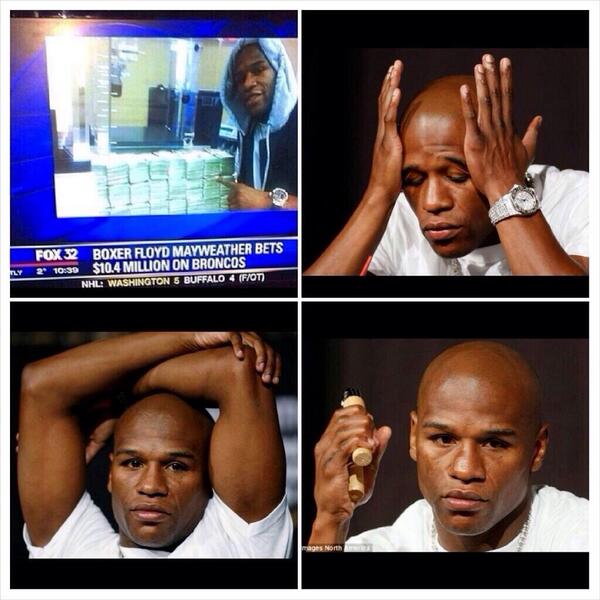 The story was reported around the world, including on our own pages, but Mayweather rubbished the reports with a picture message on his Instagram account in the early hours of this morning that we’ll let you read for yourself.

The sad fact of all of this is that losing that much money wouldn’t have burned that big of a hole in Money’s bulging pockets, but quite a few people would have enjoyed to have seen him being taken down a peg.

popular
5 years ago, Hollywood took a massive gamble on a huge sequel... and lost big time
Netflix has just added 12 very big movies to their library
One of the most underrated crime thrillers of recent years is among the movies on TV tonight
Tom Hardy set to play Hannibal Lecter-type serial killer in new series
Netflix backtracks on anti-password sharing measures following user outcry
Guy Ritchie's new war movie looks like it'll be a very emotional watch
The 50 most iconic songs of all time* have been revealed
You may also like
7 years ago
Video: Galway lad lands slick trampoline trick shot using an American football
7 years ago
Pic: A very funny mistake in this US newspaper headline should give you a laugh
7 years ago
Video: Irish people watch lacrosse for the first time and explain why it’s nothing like hurling
7 years ago
Pic: WWE’s Triple H plans to eat this mountain of food over 3 days
7 years ago
Video: College footballer performs 40-inch box jump while holding two 32kg dumbbells
7 years ago
Video: The latest People Are Awesome compilation features some unbelievably talented kids
Next Page