France have beaten England - Ireland are the 2018 Six Nations champions

In the end, it was too little, too late for England as they finally battled back against France in the closing stages of their crucial Six Nations clash, only for the French to peg them right back.

It finished 22 - 16 at the Stade de France, but it's a scoreline that somewhat flatters an England side that didn't step up as they might have been expected to following Ireland's thrilling and decisive victory over Scotland earlier on Saturday afternoon.

All of which means that Ireland are now, officially, YOUR Six Nations champions. 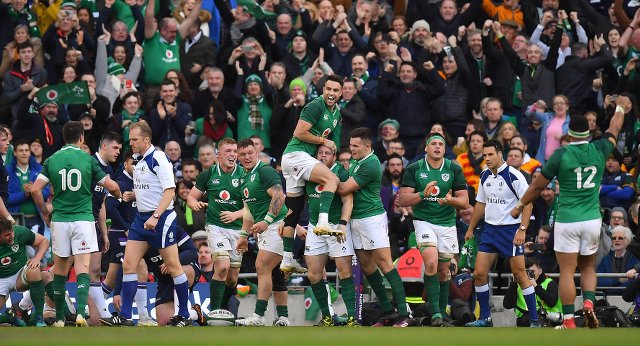 END_OF_DOCUMENT_TOKEN_TO_BE_REPLACED

His men will secure the Grand Slam should they triumph over England at Twickenham next weekend.

"We're excited, for sure, to get to Twickenham," said a typically cool Schmidt on RTÉ after the championship was confirmed. "You don't get that chance very often," he added.

A shot at the Grand Slam awaits... pic.twitter.com/Jo0QXg3hXB

Ireland are 6 Nations Champions. Muted celebrations at the Aviva... pic.twitter.com/Dnx19dSspf

popular
The JOE Friday Pub Quiz: Week 220
The JOE Movie Quiz: Week 80
Harry Styles hits back at critics who told him to be more 'manly'
Facebook to remove false claims about Covid-19 vaccine
Here are the 6 best movies on TV tonight
Status Yellow snow warning issued for five counties
Here's the lineup for this week's Late Late Show
You may also like
2 weeks ago
Lions star on Daniel Craig's post-match gift, worthy of 007 himself
8 months ago
FAI and Irish Rugby suspend all related activities with immediate effect
9 months ago
Ireland vs Italy Six Nations games will not go ahead due to coronavirus concerns
11 months ago
Rory Best encourages public to get nominating for Grandparent of the Year
1 year ago
SportsJOE presents The Great Debate
1 year ago
WATCH: Players from Cavan RFC give our Ice Bath Quiz a go
Next Page