Tyson Fury's fight with Deontay Wilder is one of the most eagerly anticipated bouts of the year.

Both Fury and Wilder are unbeaten ahead of their meeting at Los Angeles' Staples Center and the fight is expected to be watched by millions around the world.

Although it's due to start around 5am on Sunday in Ireland (depending on the undercard), it's anticipated that the fight will attract plenty of viewers from these shores. 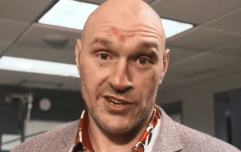 END_OF_DOCUMENT_TOKEN_TO_BE_REPLACED

BT Sport hold the pay-per-view rights in the UK and Ireland, and authorities have now warned against those considering streaming the fight illegally... not that anyone reading this would do such a thing, of course.

Speaking to the Express, Kieron Sharp, CEO of the UK's leading intellectual property protection organisation FACT, said: "Streaming this weekend’s fight on social media, a piracy site, or using a device, box or stick connected to your TV or mobile device is illegal.

"By tuning in through anything other than official paid channels, viewers, as well as the providers, are breaking the law.

"FACT is working with BT Sport and other rights holders to disrupt and prevent illegal streaming and digital piracy, ensuring that those who engage in this activity are held accountable for their actions.

"This includes criminal and civil action as well as other types of enforcement.

"As the streams appear to be free or provided at a much lower cost there is a further potential price to pay.

"Malware installations are often delivered as part of the plug-in that users are required to install; the consequent problems this can cause are obvious.

WATCH: Tyson Fury's post-fight interview is a powerful message for anyone suffering with mental health issues

END_OF_DOCUMENT_TOKEN_TO_BE_REPLACED

"Extreme pornography is also sometimes part of the illegal package, which creates unwelcome content for viewers."

Friday saw Fury complete his weight loss journey with an impressive weigh-in. He also appeared to be amused by Wilder's official weight.

House of Rugby Ireland · Ireland's feel-good win, Casey's initiation song, scrapping Sexton and Scott Williams interview
popular
Eoghan McDermott to leave RTÉ after six years (Report)
€17,500 worth of cocaine found at street party in Limerick
Sony are giving away a free game to all PS4 and PS5 owners
25 more people with Covid-19 have died in Ireland, 566 new cases
One man has been charged following Limerick street party, 50 FPNs issued
NUIG students told to write 2,000 word essay for breaching Covid rules
One of the most fertile men in Ireland is a guest on tonight's Claire Byrne Live
You may also like
8 months ago
Leo Varadkar says contact has been made with UAE in relation to Daniel Kinahan
1 year ago
WATCH: New Tyson Fury segment is the WWE at its most ridiculous
1 year ago
Tyson Fury does Apollo Creed cosplay, despite the fact Apollo gets killed in that film
2 years ago
WATCH: Tyson Fury goes full Undertaker following THAT hook from Deontay Wilder
3 years ago
Tyson Fury wasted absolutely no time responding to Anthony Joshua's call out
4 years ago
Tyson Fury has had a cheeky dig at Conor McGregor
Next Page