PIC: This GAA club are a little 'sheep'-ish about their latest problem

If it continues, they're going to get very maaaa-d.

GAA football season is in full flow all around the country and at this time of year, there can be no additional problems.

END_OF_DOCUMENT_TOKEN_TO_BE_REPLACED

Anything non-football related must remain away from your grounds until the season is over because nothing and we mean nothing must get in the way of football preparation.

This GAA club, (who has since deleted this post, hence why the name is scribbled out) came across a little trouble on Wednesday evening when they had some new additions to their squad... 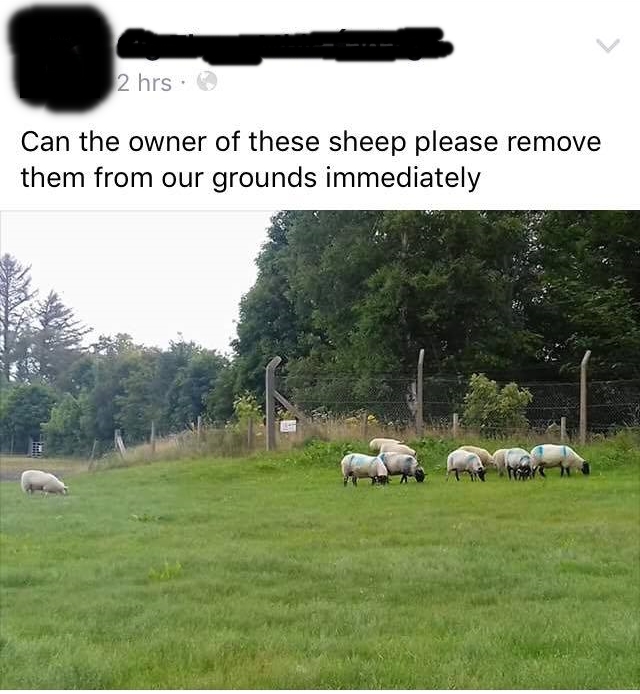 Their furry friends weren't on their main pitch but their location wasn't too far away either.

END_OF_DOCUMENT_TOKEN_TO_BE_REPLACED

The club's chairman took to their Facebook page where he asked nicely "can the owner of these sheep please remove them from our grounds immediately."

Fair enough, the sheep weren't causing any harm to anyone and, in fact, they were doing the club a favour by trimming the grass for them.

However, it was what was happening after they digested the green stuff that the club's chairman had the problem with and it was something that needed to be resolved quickly before the situation got... messy.

Maybe the club should let the animals into the opposition dressing room before a big game so they can leave their opponents some nice pre-match treats.

popular
Met Éireann issues weather warning for three counties
QUIZ: Take your very best shot in this tough General Knowledge Quiz
QUIZ: Can you conquer this delightfully difficult General Knowledge Quiz?
The JOE Movie Quiz: Week 160
The JOE Music Quiz: Week 110
An underrated Jason Statham thriller is among the movies on TV tonight
The JOE Friday Pub Quiz: Week 300 - the Triple Century
You may also like
1 month ago
The 2 Johnnies share unbelievable catfish ordeal affecting over 40 people
1 month ago
Limerick hurler arrested following alleged altercation with Tipperary player in Limerick pub
2 months ago
Woman in her 20s dies after accident during Camogie match
8 months ago
Wicklow GAA to investigate fight after Under 15 match on Saturday
1 year ago
Post-match celebrations and a lack of social distancing at certain events put club game on hold
1 year ago
Cork GAA pleads with clubs and supporters “not to engage in celebrations that breach current guidelines”
Next Page