All four teams that were expected to progress did so on Saturday, but did Donegal, Cavan, Cork and Tyrone show enough for us to believe they can go all the way?

If you were lucky enough to be in Croke Park on Saturday you really were treated to a feast of football. Three good games, all close or very close until the final minutes, and each speckled with some brilliant pieces of individual skill and drama. From Paul Geraghty’s goal for London to Michael Meehan’s thunderous free-kick to Sean Cavanagh’s shuffle to Stephen Bray’s point, there was so much to savour at HQ on Saturday. But what does it all mean in the race for Sam?

Let’s take Cavan first.  In the end they beat London by nine points and that’s really all anyone could expect of them. But the game was in the melting pot for far too long, at least from a Breffni point of view. A fine save by Alan O’Mara in the Cavan goal from a Damien Dunleavy shot ensured that London’s hopes of a comeback were dashed and Cavan went straight up the other end to raise a green flag of their own via Niall McDermott.

END_OF_DOCUMENT_TOKEN_TO_BE_REPLACED

That blow KO’d a visibly tired Exiles team but that was in the 68th minute. That Cavan struggled to put London away until the death doesn’t augur well for their hopes next week. Kerry, well rested and relaxed, couldn’t have hoped for a better draw.

Next out at Croke Park was Cork and Galway and we thought we were set for a minor shock. Cork were disjointed, wasteful and seemingly playing without a plan. Galway at least had some tactical shape and Michael Meehan and Sean Armstrong were given the freedom of Croke Park at times.

They, along with a superb midfield performance by Paul Conroy, contrived to put Galway in pole position with just 10 minutes on the clock. But then Conor Counihan’s strong bench made its mark. Paul Kerrigan, Paudie Kissane and Paddy Kelly started to exert an influence and Cork clicked into gear. An Aidan Walsh goal instilled further belief in the Rebels and they pulled away. Meehan’s stunning late free narrowed the gap to the minimum but the clock beat them. After a disastrous start to Mayo, Galway's summer ends on a hopeful note.

For Cork, you just have to wonder how far they can go while seemingly rudderless, and weak right down the spine of the team, particularly at centre back and midfield. They have the panel, and players like Noel O’Leary and Fintan Goold didn’t even get a run out on Saturday, but they need to find their groove much earlier and stay in it for longer than a few minutes at a time. With Dublin on the horizon, they cannot be so loose next weekend.

END_OF_DOCUMENT_TOKEN_TO_BE_REPLACED

The third act, and deserved headliners, was the clash of Tyrone and Meath. This match had it all. Sean Cavanagh gave a virtuoso performance, Eamonn Wallace finally added the finishing touch to his clearly unstoppable pace and Michael Newman put on another Brian Stafford-esque show. 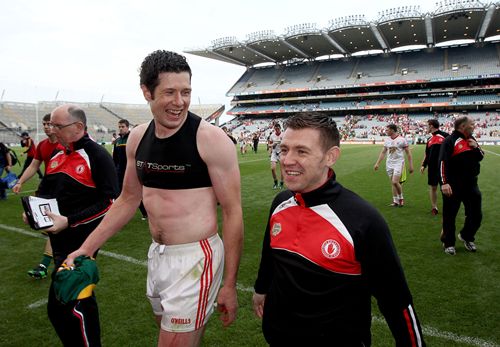 But the wily Red Hands saw the game out, with the likes of Peter Harte, Joe McMahon and Darren McCurry playing extremely well indeed. Again Mickey Harte’s side went out of the game for a significant period (the third quarter this time), a trend that has dogged them all year, and one they have to eradicate. But if Cavanagh keeps this level of performance up, we’d be very nervous if we were Monaghan.It’ll be some game next weekend.

END_OF_DOCUMENT_TOKEN_TO_BE_REPLACED

And then there was Donegal. Playing off Broadway (sorry Carrick) they did what they had to do, overcoming the six-day turnaround but they certainly didn’t restore that aura of invincibility they had in early summer. Yes, they were still without Mark McHugh, and yes, Karl Lacey was a shadow of himself, but Laois were right in the game until the final few minutes before Donegal stretched away. Their top class forward line found their feet again after failing fairly miserably against Monaghan. Messrs McFadden, Murphy and McBrearty combined for 0-11 and if they can repeat that trick three more times, it might be enough for back-to-back Sams.

But another massive game, against a Mayo team who are itching to get at them, is probably the last thing Jim McGuinness’s team need. The mind games, and sparring, have already begun in the press. It’s going to be a hell of a week, and an even better weekend.

popular
People want "offensive" Crown Paints advert banned after attracting hundreds of complaints
Arrest made after shop robbed at knifepoint in Dublin
Here's how to make €9-11 on Revolut in just a few minutes
QUIZ: Can you identify the famous song from the opening line?
New car-free town with population of 85,000 set to be built in Dublin
Man arrested on suspicion of the murder of Irish man in London
QUIZ: Can you name all the countries beginning with A?
You may also like
1 month ago
Looking for a hotel room for the All-Ireland Final weekends? It won't come cheap...
1 month ago
Taoiseach condemns "disturbing" fight at Galway v Armagh game
2 months ago
The 2 Johnnies share unbelievable catfish ordeal affecting over 40 people
3 months ago
Limerick hurler arrested following alleged altercation with Tipperary player in Limerick pub
3 months ago
Woman in her 20s dies after accident during Camogie match
10 months ago
Wicklow GAA to investigate fight after Under 15 match on Saturday
Next Page