PIC: There's a great story behind this unique piece of GAA memorabilia in one of Galway's most famous pubs

It was such a good feeling, he hit the ceiling.

GAA is special and supporting your home county and watching them win a game can fill you with immense pride.

Some fans celebrate in different ways. Some roar and shout and jump until their throat and legs are burnt out.

Others analyse the game play-for-play and leave the vocals to others. Whatever kind of supporter you are, it would be hard not to lose yourself if your county won the coveted Sam Maguire.

As a Mayo fan, I don't know what it's like to win Sam (yet) but I assume that I and the thousands of Mayo fans that travel the length and breadth of the country to watch the team would react in a similar fashion.

I was in Taaffes pub in Galway on Friday night enjoying a pint of the black stuff.

The pub is an intimidating spot to be a Mayo fan in at the best of times and the small bar to the right as you come in the door is filled with Galway memorabilia from wall to wall.

Pictures of the '88 hurlers and the '98 and '01 footballers fill the room but the most famous piece of Galway memorabilia is actually on the roof.

I got talking to Paddy Lally, a brother of the pub's owner, Padraig, and as you do in a room filled with footballing memories, we started talking GAA.

Attention turned to the Mayo v Galway game on Sunday and I asked him what it felt like to see your county win an All-Ireland. He said it was indescribable and told me the story of Colie Keane's hole.

END_OF_DOCUMENT_TOKEN_TO_BE_REPLACED

He told me that Colie worked in Taaffes and unfortunately had drawn the short straw to work the day of the 1998 All-Ireland Final, when Galway were playing Kildare.

Colie managed to get off a bit early to watch the game and as he swapped sides of the bar, he watched Padraic Joyce score a goal that proved to be crucial as Galway edged the Lilywhites by four points.

It all got too much for Colie and as the ball struck the back of the net, he jumped up and struck the ceiling with his fist, putting a hole in the roof.

As Galway ran out victorious and the celebrations began, the hole was forgotten about until the next day when one of the locals wandered into the pub and said to the owner 'You'd want to sort out that hole'.

However, instead of covering it up, Padraig the pub owner decided to frame it. 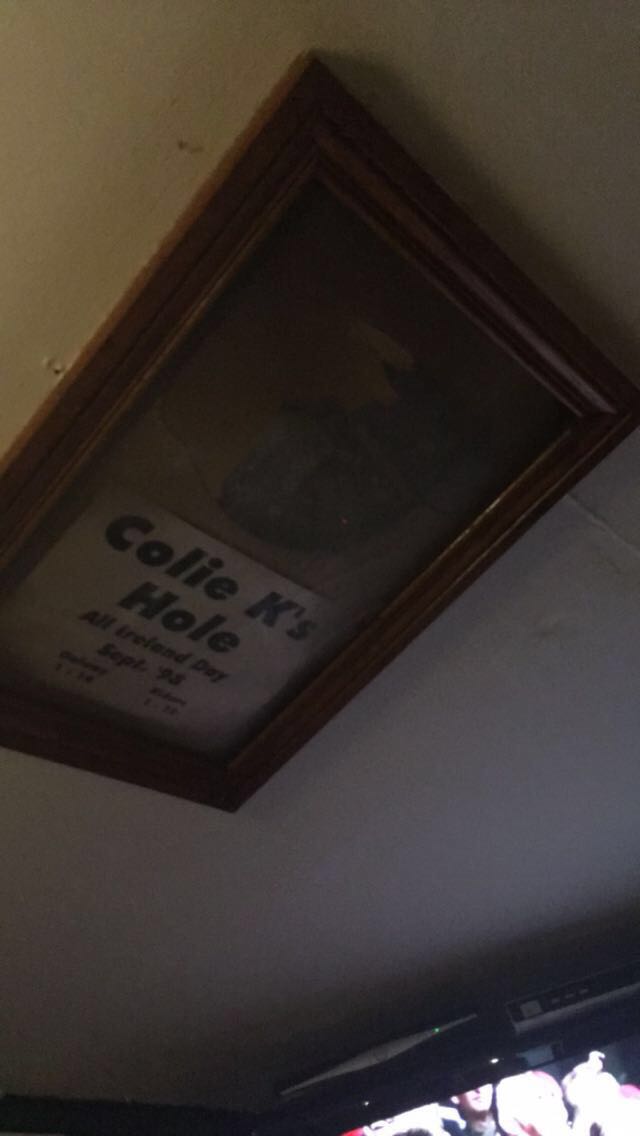 "What a story and what a treasure to have in the pub," said I to Paddy.

"It's almost perfect", he said. There was such excitement in getting the frame up to mark Galway's win, they left out the letter L in Kildare.


popular
Ireland's best places to work for 2020 have been revealed
ISPCA rescue horse tied to electricity pole in Tipperary
Interactive infographic shows real-time spread of coronavirus outbreak
Here's Week 21 of JOE's 19 in 90 quickfire quiz
QUIZ: What movie/TV show are these fictional sports teams from?
Emirates is recruiting new cabin crew members in Galway for tax-free jobs
Six dead following mass shooting in Milwaukee
You may also like
3 months ago
QUIZ: How good are you at first aid?
4 months ago
Nine injured in Enniskerry after GAA players fall from top of vehicle
5 months ago
Comedian Josh Pray to stop making Irish-themed videos following online abuse
5 months ago
WATCH: Would you give in to the toughest GAA fan temptation?
7 months ago
WATCH: American comedian's reaction to Gaelic Football captures the madness of the sport
8 months ago
Mayo businessman believes he has finally debunked the myth of the 'Mayo Curse'
Next Page