Absent from the Ireland squad during the successful Six Nations campaign, Simon Zebo gave Joe Schmidt plenty to think about with his displays during Ireland’s tour of Argentina.

There was no doubt that injuries had a large part to play in Simon Zebo failing to force his way into the reckoning for Ireland’s Six Nations campaign, but there was also a school of thought suggesting that Zebo might not be Joe Schmidt’s type of player.

It might be a bit harsh to label him as ‘flash’ but the Cork native, *cough* surprisingly *cough* for someone from that part of the world, is certainly a confident lad and not afraid to express himself out on the pitch, whether it’s through an outrageous piece of skill like THAT flick against Wales in 2013 or the ‘Z’ celebration he pulls out every time he crosses the whitewash.

END_OF_DOCUMENT_TOKEN_TO_BE_REPLACED

It’s hard to know for certain if there was any substance behind the suggestion that Schmidt didn’t fancy Zebo – from what we know of the Ireland coach, we’d be surprised if there was – but after the performances of the Kearneys and a rejuvenated Andrew Trimble in the back three, he was always going to have to work hard to get back into the first team reckoning.

And, all credit to Zebo, he did just that. A try-scorer against both Toulouse and Toulon in the Heineken Cup quarter and semi-finals, he finished the season very strongly and maintained that form during Ireland’s tour of Argentina earlier this month.

Ireland’s performances in Tucumán and Resistencia were far from perfect, but Zebo made an impression in both games, catching Joe Schmidt’s eye with his defensive qualities in the first test and managing to score a very well-executed try in the second test last Saturday. 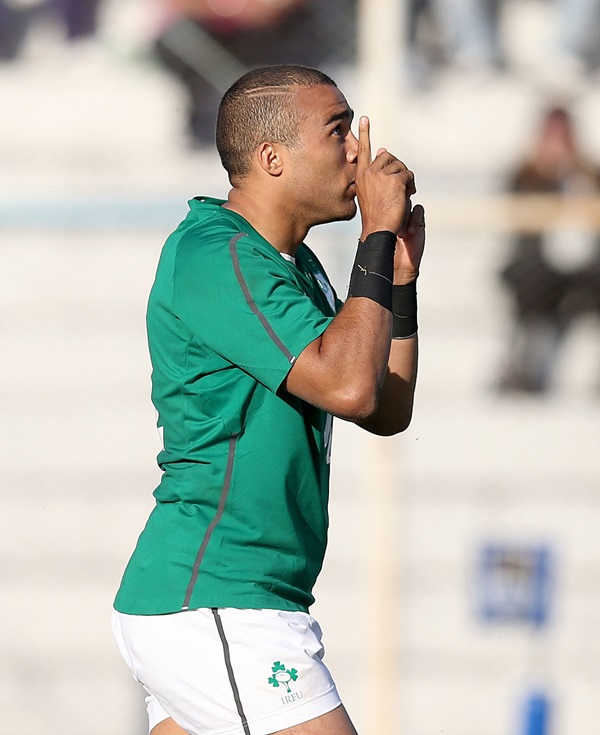 END_OF_DOCUMENT_TOKEN_TO_BE_REPLACED

Zebo celebrating his try against Argentina in the second test

Commenting after the first test, Schmidt said of Zebo’s performance: "Simon certainly did some good things during the game and having gone back over the video there was some quality in what he did defensively.

"His tackle accuracy was good. Post-tackle there was things that he and I had a look at that he can sharpen up and maybe if he didn't take too much out of the ball, maybe he could get other people involved.

"But when he does take a bit out of the ball, he is such a threat carrying it – that is a real strength.

END_OF_DOCUMENT_TOKEN_TO_BE_REPLACED

"His work off the ball in behind, was very good, it gave us the opportunity to pendulum with our back three, that is a step forward for him."

If he wasn’t Schmidt’s favourite player before the tour, he certainly went some way to changing that perception in South America and, barring any injury setbacks between now and then, you can almost guarantee he’ll be involved when Ireland take on more intimidating Southern Hemisphere opposition in November.

Let's just hope he doesn't have to call Schmidt up in an attempt to be named captain like he did with Rob Penney on the Lions Tour last year...

popular
Peter Kay moved to tears on stage while opening his first stand-up tour in 12 years
20 years ago, one of the best sci-fi movies of the 21st century was a box-office bomb
Simon Cowell concerns fans with appearance as they 'don't recognise him'
U2 drummer Larry Mullen Jr. says band may perform without him in 2023
Boy, 1, eaten alive by 11-foot crocodile in front of dad on fishing trip
No, we've never heard of the new "best movie ever made" either
Mia Khalifa claims seaside town is better than Miami
You may also like
2 months ago
Iconic rugby commentator Eddie Butler dies aged 65
8 months ago
Scottish Parliament official dies during rugby game in Dublin
9 months ago
Every Guinness fan needs to try these brand new experimental beers
9 months ago
"Samaritans saved my life" - Brent Pope praised for honest interview on Tommy Tiernan Show
1 year ago
"You want to prove them wrong, even if they're not telling the right story" - Conor Murray
1 year ago
Four Irish players propelled into Lions debate after England hiding
Next Page