Shamrock Rovers player Graham Burke has become the first League of Ireland player to score for Ireland in 40 years.

Burke scored his first international goal in a friendly at the Aviva on Saturday night, equalising the score to 1-1 against the States.

WATCH:@ShamrockRovers man Graham Burke bags his first International goal to make it 1-1 at the Aviva!

It's probably the easiest goal he's scored this season, but what a moment for the 24 year old!#IRLUSA #COYBIG #LOI pic.twitter.com/zi2sYRFjOd 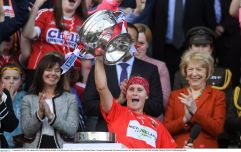 END_OF_DOCUMENT_TOKEN_TO_BE_REPLACED

The 24-year-old has been juggling both club and international commitments this month, with Ireland boss Martin O'Neill mentioning during the week that he was keen to keep him fresh for the USA friendly at the Aviva.

This meant he had to miss the Shamrock Rovers' game against Dundalk in Tallaght on Friday.

Burke won his first Republic of Ireland cap in Monday’s defeat to France.

The last player to do this was fellow Shamrock Rovers man Ray Treacy back in 1978.

Graham Burke becomes the first LOI player to score for Ireland since Shamrock Rovers' Ray Treacy in a 4-2 win over Turkey at Lansdowne Road in April 1978. He scored twice and missed a penalty. Rovers clubmate John Giles had scored the opening goal as wellhttps://t.co/eyTUaov4mH

Republic of Ireland fans have been praising the young sportsman's efforts online.

This day last year Graham Burke got sent off for Rovers against Pats stupidly and some wanted him gone from the club that night. One year on and he has scored for Ireland on his first start and third game in the space of two weeks... Delighted for him #KOH #COYBIG https://t.co/dpbY1Gsxnw

Very impressive first start by Graham Burke. Looked very comfortable and took up some great positions without getting the ball 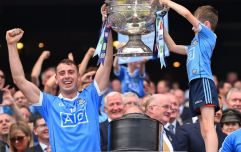 END_OF_DOCUMENT_TOKEN_TO_BE_REPLACED

Saturday's game also saw sporting icon John O'Shea play for the final time in green. The Waterford-native left the pitch at the 33rd minute to raucous applause in wake of his final game.

O'Shea is set to retire as one of Ireland's most decorated players, appearing over 250 times for Manchester United, claiming several Premier League titles during his time at the club, and, of course, lifting a Champions League trophy.

popular
QUIZ: Can you name all these European countries from a list of cities?
The JOE Friday Pub Quiz: Week 248
The 50 most iconic songs of all time* have been revealed
Three men arrested after reportedly attacking staff of premises on South William Street
PICS: The man with the biggest penis in the world has one unbelievable problem with it
One of the most iconic thrillers of all time is among the movies on TV tonight
The DUP is heading for self-destruction, claims Joe Brolly
You may also like
7 hours ago
313 new cases of Covid-19 have been reported in Ireland
8 hours ago
The DUP is heading for self-destruction, claims Joe Brolly
11 hours ago
Aer Lingus introduce new fee to bring carry-on bags onboard flights
13 hours ago
Taoiseach Micheál Martin calls for "calm heads" after Edwin Poots resignation
14 hours ago
Rise in under-18s buying alcohol through drink delivery services, groups warn
16 hours ago
Appeal made for witnesses after cyclist hit by car in Dublin
Next Page