Continuing our look back at some of the most iconic and brilliant victories for the Brazilian football team over the years, we remember a very recent game in Brazil's illustrious history.

END_OF_DOCUMENT_TOKEN_TO_BE_REPLACED

When Brazil met World and European champions Spain at the Maracana on June 30th 2013 in the final of the Confederations Cup, it was meant to be the acid test for the World Cup hosts. Spain, widely regarded as the best international team of all time, had swept all before them on the international scene. Brazil, even though playing on home soil, came into the game as slight underdogs as Spain were on an incredible run of 29 matches undefeated.

The ensuing 90 minutes told us that Brazil were a team to be feared and left absolutely nobody in doubt that they were serious contenders for the World Cup this summer. They swept the Spanish aside in a comprehensive 3-0 win and reduced the Spanish into looking like mere mortals.

Brazil roared out of the blocks and by the second minute had taken the lead through their striker and local favourite, Fred. Hulk sent in a dangerous cross and, even though Fred slipped, he managed to improvise and poke the ball past the Spanish keeper Casillas to send the Maracana into raptures (pic below). 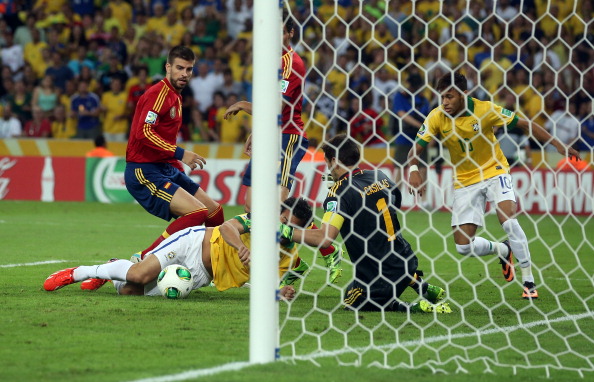 END_OF_DOCUMENT_TOKEN_TO_BE_REPLACED

In the 44th minute, Oscar and Neymar exchanged passes on the edge of the Spanish penalty area. Neymar, who just managed to stay onside, received the pass on the left hand side of the box and took one touch before unleashing an unstoppable rocket of a shot high into the roof of the Spanish net (pic below) leaving Casillas absolutely no chance. It was 2-0 to Brazil at half-time and the Maracana was rocking. 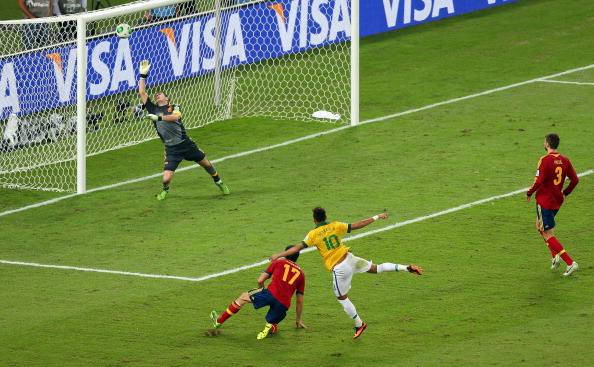 Just as they had started the first half, Brazil wasted no time in getting down to business in the second half. Barely two minutes had passed when they increased their lead. Fred latched on to a pass at the corner of the Spanish box and nonchalantly hit it first time (pic below), bending it in at the far post around the despairing dive of Casillas and putting Brazil into a commanding 3-0 lead. The match was as good as over and the Brazilian supporters celebrated accordingly. 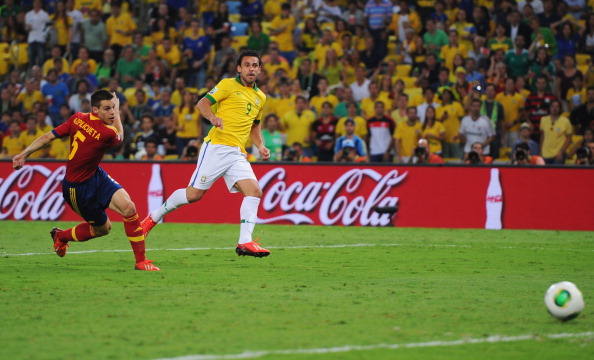 END_OF_DOCUMENT_TOKEN_TO_BE_REPLACED

Spain did try to come back and won themselves a penalty in the 49th minute following a foul on Navas, but Sergio Ramos put the resulting spot-kick wide. Spain's misery was further compounded in the 68th minute when Pique was sent off for a foul on Neymar just outside the Spanish box (pic below). 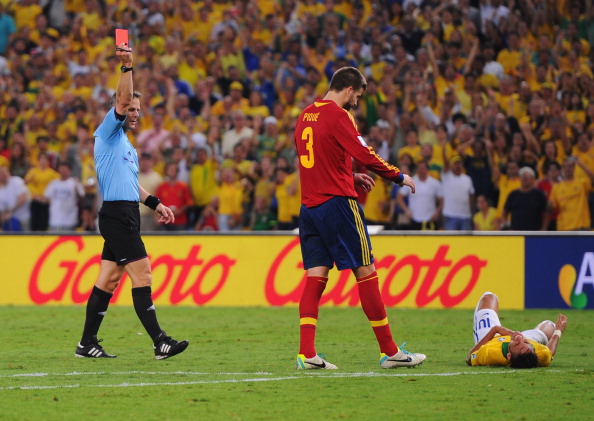 It was a comprehensive victory for Brazil and signalled their intent on being the World Cup winners this summer. Their threat is very clear and present and only a foolish man would bet against them this year.