WATCH: Not seeing any results at the gym? Then this is the sport you should take up

It's one of the oldest equestrian sports in the world.

Jousting is the ultimate workout. People who take part in the sport have fitness levels which are better than footballers, tennis players and Formula One drivers combined.

The heavy armour makes your body intrinsically strong and it is as if your doing double the workout and as a result, it burns a huge amount of calories very quickly. 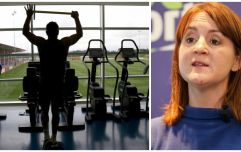 END_OF_DOCUMENT_TOKEN_TO_BE_REPLACED

Also, there must be something very exhilarating about riding around on a horse at 3o miles per hour and although it can be very dangerous, it is something that most people have saw and thought 'wouldn't mind giving that a go.'

Well, a study conducted by the University of Bath wanted to see how the art of jousting, compared to that of other sports which are played at a high intensity.

The study was commissioned by English Heritage who love the sport and had a campaign for it to be recognised as an Olympic sport in 2016.

They put 33-year-old professional jouster, Roy Murray, through tests used when training Olympic athletes to see how his fitness levels would compare theirs.

According to The Guardian, tests that were done on Murray found that his body fat was 7.7% which was under the average body fat for most professional footballers whose fat ranges from 8% to 10%.

He also recorded five bench presses of 67kg meaning he displayed twice the upper-body strength required to get into the police force and when his cardiovascular fitness was tested, they found that his levels were in the same category as top tennis players.

There is a lot of factors involved when jousting, you carry a lance, you constantly take blow after blow and your field of vision is completely disrupted.

However, this is something that Murray is used to and his core stability tested better than professional swimmers and his alignment and balance were on par with professional acrobats.

You can watch the full video of the study below...

The Big Reviewski || JOE · TBR Spotlight: Loki Episode One - 'Glorious Purpose'
popular
Matt LeBlanc has seen the memes of him as every Irish auld lad and very much enjoyed them
The 50 most iconic songs of all time* have been revealed
PICS: The man with the biggest penis in the world has one unbelievable problem with it
People think they've figured out the ranking of the viewers on your Instagram Stories
Taking a look at the missing end credits on the first episode of Loki
QUIZ: Take on this tasty challenge of your General Knowledge skills
QUIZ: You won't be able to guess all these brands from their slogans
You may also like
2 months ago
Popular gym supplement found to be ineffective at building muscle
3 months ago
The Rock's leg day routine is one of the toughest workouts ever
5 months ago
Five exercises you can do at home, no gym equipment required
6 months ago
COMPETITION: Win €745 worth of top quality gym equipment from McSport to celebrate their Black Friday sale
7 months ago
Gini Wijnaldum shares his favourite gym exercises for building abs of steel
7 months ago
Armed police close gym near Liverpool after owner refused to shut doors
Next Page