Ryan McBride was a warrior.

Saying 'was' is not right and it is not fair.

You'd go a long way to find a football player as tough and a man as fierce. 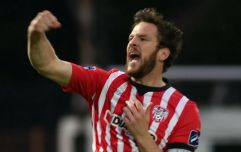 END_OF_DOCUMENT_TOKEN_TO_BE_REPLACED

He wore the captain's armband for his hometown club with distinction. A leader of men, he has been the heartbeat of Kenny Shiels' revolution at the Brandywell, a stadium where McBride lives right beside.

The defender led the Candy Stripes to another victory on Saturday when he played the full 90 minutes of their 4-0 win over Drogheda United but news has since followed that the Derry man has passed away.

The cause of his death is unknown but he is understood to have been found dead in his bedroom on Sunday.

According to the Derry Journal, throngs of mourners and supporters have gathered at his home in Bluebell Hill in such tragic, tragic circumstances.

Our thoughts are with everyone who knew and supported Ryan at this awful time.

The Big Reviewski || JOE · Shane MacGowan snarls & stars in this new documentary from Julien Temple
popular
9 weird and wonderful Irish Christmas traditions we absolutely love
The JOE Friday Pub Quiz: Week 220
The JOE Movie Quiz: Week 80
The JOE Music Quiz: Week 36
Harry Styles hits back at critics who told him to be more 'manly'
Status Yellow snow warning issued for five counties
The 50 most iconic songs of all time* have been revealed
You may also like
4 years ago
VIDEO: Derry City's tribute to Mark Farren is incredibly moving
5 years ago
Manchester United legend Andrei Kanchelskis could be on his way to Derry City
5 years ago
VINE: Derry City's Ryan McBride with one of the strangest tackles that you'll ever see
5 years ago
PIC: This Italian Football Manager fan travelled 5,000km to Ireland for a Derry City player's autograph
5 years ago
The Bohs stadium announcer had a very odd request for the crowd this evening
5 years ago
One New York priest is very confused about reports that he's signed for Celtic
Next Page