Clever marketing at O'Neills and they're already talking homecomings in Donegal

Today's Hospital Pass features the most opportunistic GAA marketing campaign in many a year and premature homecoming talk in Donegal.

The marketing guy at O’Neill’s deserves a raise

There were so many talking points emanating from yesterday’s exhilarating All-Ireland semi-final that one could be forgiven for forgetting about Rory O’Carroll’s rather roughshod attempts to pick Enda Varley off the floor while the Mayo man lay prone on the turf with a broken nose.

The lads at O’Neill’s certainly didn’t forget about it though and, obviously not ones to let a good marketing opportunity pass them by, they circulated the following advertisement earlier today. 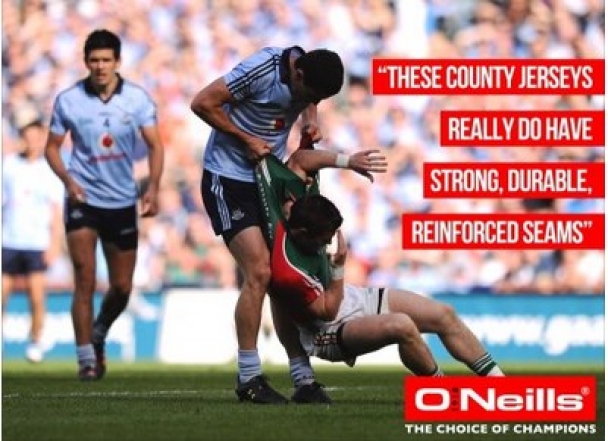 END_OF_DOCUMENT_TOKEN_TO_BE_REPLACED

Hat tip to Eoin Foster for sending us in the pic

Considering how snug and figure hugging modern day county jerseys appear to be – the muscular men of Kildare like them particularly tight – O’Carroll did well to grab that much of Varley’s jersey and, in fairness to O’Neills, the jersey did seem, or seam in this case,  to hold up pretty well under the circumstances.

That’s not to condone O’Carroll’s actions by the way, his treatment of Varley was very unseemly and it was subsequently revealed that Varley had a broken nose so he was obviously badly hurt.

Still, while he might have two shiners this morning, Varley will have a smile on his face while his aggressor will be nursing the scars of defeat.

After yesterday’s events the sale of Mayo jerseys was bound to increase dramatically in the next few weeks anyway, but this little marketing exercise might add a little bit extra to the O’Neill’s coffers.

END_OF_DOCUMENT_TOKEN_TO_BE_REPLACED

It’s a bit early for homecoming talk in Donegal, isn’t it?

The issue of hype, and how it can affect a county in the build-up to a big game, has been discussed in Hospital Pass on numerous occasions in the past. There’s no county guiltier than my own Mayo, and I can only hope that we don’ get too carried away with ourselves in the next three weeks.

In James Horan and Jim McGuinness, both counties have the managers to ensure that their players’ feet will be kept firmly on the ground, but it is never usually the fault of the players or the manager for a county losing the run of itself.

No, it’s most often the fault of people with little or no association with the team, people like the folks at the Letterkenny Chamber, who are making a pretty big deal out of where the Donegal team will return to following the All-Ireland Final in a few weeks time.

END_OF_DOCUMENT_TOKEN_TO_BE_REPLACED

According to a report on donegaldaily.com, the Letterkenny chamber have written a “strongly-worded letter” to the Donegal County Board to try and ensure that the team’s homecoming will take place in Letterkenny as opposed to the diamond in Donegal Town, where the team usually visit after a big game and did so following their Ulster Final success earlier this year.

Letterkenny Chamber President John Watson said: “We feel the time is right now that Letterkenny could be the place for the team to return to.

“We will welcome the team back with or without the Sam Maguire after the final and it won’t cost the County Board a cent.

“For years the team has returned to Donegal Town and we feel it’s time that Letterkenny got a turn.

“We are the biggest town in the county and a number of businesses from the area have sponsored the team in recent years.

“We feel it would be a nice touch if the homecoming could be shared around and we would like to do it after the All Ireland final.”

Fair enough if Letterkenny wants its piece of the pie, but we’d wager that Jim McGuinness wouldn’t be impressed with talk of homecomings at this stage; it’s hardly the main issue at hand.

Win the game first and then we’ll worry about homecomings is probably what McGuinness is thinking and besides, if a football-mad county like Donegal won the All-Ireland, they could return home to a field in the most distant reaches - and Donegal has some pretty distant reaches - of the county and everyone would still turn up for the party.

Whether the party will be in Donegal town, Letterkenny or Castlebar, we'll see in three weeks.

House of Rugby Ireland · Quinn Roux on finding a home in Ireland and Mike McCarthy brings the absolute HEAT!
popular
Snow and ice warning issued for seven counties
Xbox reveals full list of exclusive games arriving in 2021
The 50 most iconic songs of all time* have been revealed
Tom Hanks has addressed the rumours that he'll run for President in 2020
New year, new you, new career? This opportunity could be right up your street
11 arrested at planned protest at the Four Courts
RTÉ publishes list of top on-air earners for 2017 to 2019
You may also like
3 months ago
Post-match celebrations and a lack of social distancing at certain events put club game on hold
3 months ago
Cork GAA pleads with clubs and supporters “not to engage in celebrations that breach current guidelines”
7 months ago
What's the Bronco test and why it may come up in conversation this week
9 months ago
The Andy Moran GAA Isolation Workout
9 months ago
SuperValu, Centra and the GAA team up on initiative to support elderly people
10 months ago
Meath GAA club confirm adult player has tested positive for coronavirus
Next Page