Infographic: The number of GAA clubs in every county in Ireland and every continent around the world

If you’ve ever been to America, Australia or even further afield, you’ve probably seen the global appeal of the GAA at first-hand and the development of our native games far away from home.

The spread of the GAA is illustrated in a graph detailing the number of clubs both in every county in Ireland and also in every continent around the world that first appeared in Congress papers in February and was posted on Twitter by the official European County Board account earlier today. 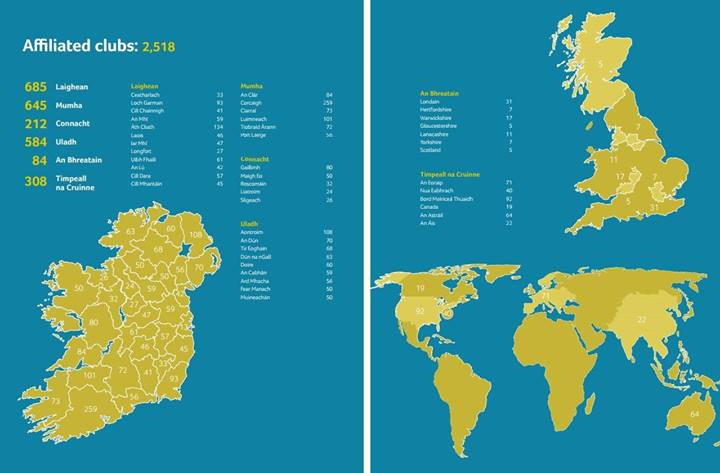 END_OF_DOCUMENT_TOKEN_TO_BE_REPLACED

The graph was published amidst talk about the GAA possibly gaining Olympic recognition and even its own World Cup in the future and though those possibilities might be well down the road at this stage, the graphs certainly makes for interesting reading.

They detail, for example, that there are well over 100 (132) affiliated GAA clubs in the United States, 40 of which are in New York alone, 64 in Australia, 22 in Asia and 71 in Europe, excluding the UK and obviously Ireland itself.

In the UK, there are 83 clubs, over a third of which (31) are based in London, with the GAA’s presence felt right the way up to Scotland, where there are five clubs in total.

END_OF_DOCUMENT_TOKEN_TO_BE_REPLACED

At home, meanwhile, Cork have by far and away the most amount of GAA clubs with 259, well ahead of Dubin (134), Antrim (108) and Limerick (101), while considering the size and population bases of the two counties, it is perhaps little surprise that Leitrim and Longford have the smallest representation with 24 and 27 clubs respectively.

If this map is to be updated in five years’ time you can almost guarantee that the number of clubs abroad, particularly in areas where the GAA is only starting to have an influence, will have increased and who knows, maybe GAA at the Olympics and the World Cup of GAA won’t be that far away after all?

popular
Netflix has just added an incredibly tense 97-minute thriller
Eamon Ryan's mother dies in tragic accident on family holiday
Forget about ultra cheap Ryanair flights for the foreseeable future, says O'Leary
Prime Video has just added 25 very big movies to its library
Stunning Mayo beach named the best place to swim in Ireland and the UK
The Ultimate "That Actor From That Thing" Quiz
WATCH: House of Hammer details the alleged crimes of award-winning actor Armie Hammer
You may also like
1 month ago
Looking for a hotel room for the All-Ireland Final weekends? It won't come cheap...
1 month ago
Taoiseach condemns "disturbing" fight at Galway v Armagh game
2 months ago
The 2 Johnnies share unbelievable catfish ordeal affecting over 40 people
3 months ago
Limerick hurler arrested following alleged altercation with Tipperary player in Limerick pub
3 months ago
Woman in her 20s dies after accident during Camogie match
10 months ago
Wicklow GAA to investigate fight after Under 15 match on Saturday
Next Page