The match has already sold out and tickets weren't made available to buy for the general public.

Tickets for Ireland's upcoming November internationals against Argentina and the USA went on sale on Friday morning, but some fans were left disappointed as tickets for the clash against the All Blacks weren't made available to the general public.

With regards to the process of buying tickets, a ticket to watch the Argentina and USA matches went on sale via the usual outlets. The New Zealand game was unique in that all available tickets were snapped up after being made available to rugby clubs, schools and the Irish Rugby Supporters Club, as was flagged by the IRFU earlier this week.

All individual and packages for New Zealand are now sold out. Tickets for Argentina and USA and the Supporters Club Match Day Event are still on sale. Two great chances to support Ireland.

Ticket Sale. Tickets for New Zealand are sold out through the distribution to Rugby Clubs & The Supporters Club. Tickets for Argentina & USA matches go on sale this morning via https://t.co/1d3Dr3g0aB pic.twitter.com/hKSIxSvPlM

While all tickets for the clash with the All-Blacks have been snapped up, some are already being touted on websites like Stubhub at incredible prices.

As you can see below, a seat in the Lower East stand will cost you €650. 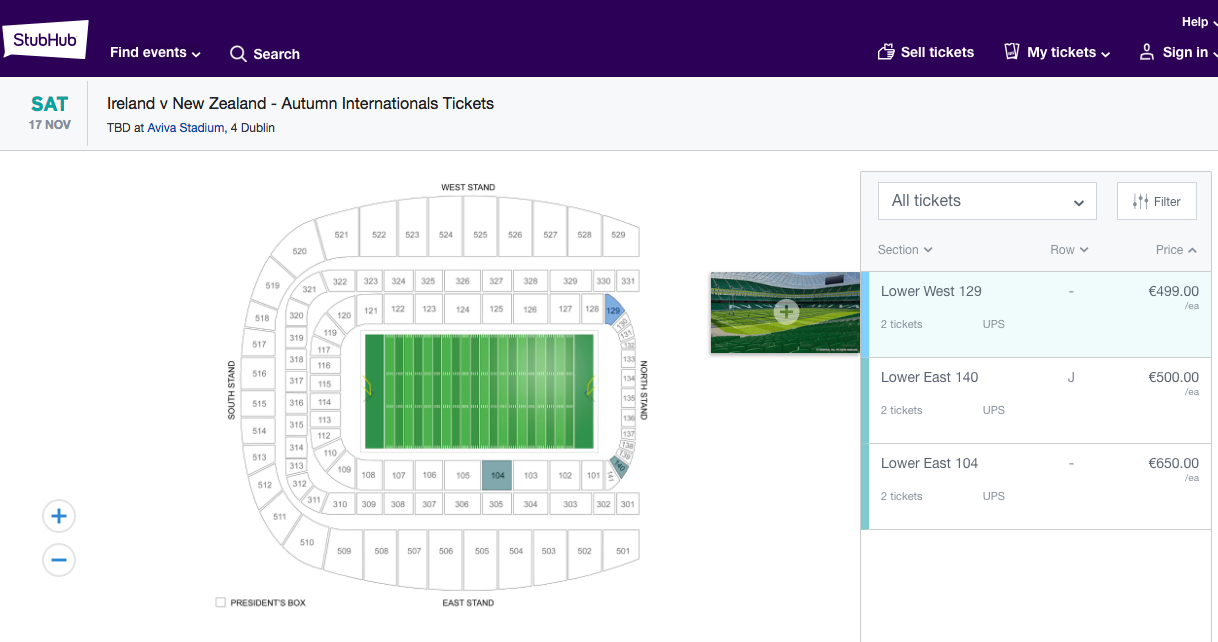 END_OF_DOCUMENT_TOKEN_TO_BE_REPLACED

JOE has contacted the IRFU for comment, but given the incredible demand to see the match against the back-to-back World Champions and despite the IRFU having flagged that no tickets were available to the general public, plenty of people were left disappointed and angry that tickets are already being resold at vastly inflated prices.

The IRFU have released the following statement: "Rugby tickets are made available to our ten year ticket holders, clubs and schools and to our Supporters’ Club members, with the balance , if any, placed on general sale.  Like most major events demand can exceed supply on some games, but tickets remain available to see the Grand Slam champions take on Argentina and the USA this November."

They are sold through rugby clubs and affiliated schools and then through the Supporters Club.

Very disappointing to see, not fair to the general public who wait for their allocated time to buy tickets and there’s none left? Surely there has to be some percentage kept for general sale.

I've actually heard people in supporters clubs/affiliates boasting about getting X amount of tickets and just selling them on. So unfair to those who truly want to go

There are tickets available on viagogo for €400 plus. How can ye explain this??

Can @IrishRugby explain how Viagago and Stubhub hav hundreds of tickets 4 sale at extortionate rates yet @IrishRugby have none left 4 general sale 2 genuine fans ?
Looks like a stitch up 2 me ?

The Big Reviewski || JOE · The Big Reviewski with Ray Liotta, Goodfellas facts & Tom Hanks making us cry
popular
The JOE Movie Quiz: Week 121
The JOE Friday Pub Quiz: Week 262
Temperatures to plummet to five degrees with thunderstorms as Atlantic system to hit next week
Ireland's newest train station officially opens in Dublin
PICS: The man with the biggest penis in the world has one unbelievable problem with it
Jason Byrne forced to cancel tour dates due to a heart condition
The JOE Music Quiz: Week 74
You may also like
7 months ago
Defence grows for Billy Burns after one of the roughest days of his rugby career
7 months ago
Major upside to Ireland's Six Nations challenge that should make all the difference
8 months ago
John Cooney comes to defence of JJ Hanrahan after kicking criticism
8 months ago
Cardiff conversation that proved Paul O'Connell always put the team first
8 months ago
Ian Keatley on Ronan O'Gara's deadpan advice and his most treasured Munster jersey
9 months ago
Springboks legend must have the greatest jersey swap collection in rugby
Next Page