You all laughed when he was named in the squad, WHO'S LAUGHING NOW?

The countdown is well and truly on now until Ireland face Denmark in the first of two crucial World Cup play-off games to see who books their place in Russia for 2018.

Ireland are currently training and while not much is being leaked to the public, the FAI did release this little beauty late on Tuesday night.

Paul McShane currently has 33 caps for the national side but after his venomous, half-volleyed shot in training plus Ireland's difficulty with scoring goals, he might just be called up for number 34. 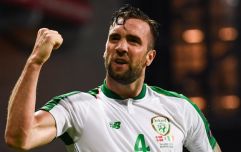 END_OF_DOCUMENT_TOKEN_TO_BE_REPLACED

McShane receives the ball from the right-hand side of the pitch and lets the ball trickle onto his left foot before letting it bounce twice in front of him.

He pulls back the left peg and the minute it's released, you just know that it's heading for the top bin and although there is never any doubt, you still can't help but gasp at the sight.

Fans that were near the pitch also let out a little 'oh' and followed it with a round of applause as the ball hit the back of the net.

Everyone was extremely impressed by the defender's citeog kick including the FAI who posted the clip on social media and said: "How about this for a strike today from Paul McShane #COYBIG."

McShane, believe it or not, has been in and out of the Ireland set up for over a decade now. He made his debut in 2006 against the Czech Republic in the 2008 European Championship Qualifying campaign.

He was a back-up player in Trapattoni's squad for the Euros in 2012 and was a stand-by player for Martin O'Neill and Roy Keane's squad in Euro 2016.

If McShane's magnificent screamer isn't appearing for you in the article, you can find it here.

The Big Reviewski || JOE · TBR Spotlight: The Falcon and the Winter Soldier Episode Four - 'The Whole World is Watching'
popular
You can now get a life-size inflatable pub for your back garden
Female personal trainer shares the creepy messages she receives from men on social media
The cast and director of Fast & Furious 9 discuss setting a sequel in Ireland
New walk-in Covid-19 test centres open across Ireland
Dublin cyclist says he "could've died" after being pushed into ditch
What Netflix’s Seaspiracy gets wrong about fishing, according to a marine biologist
The 50 most iconic songs of all time* have been revealed
You may also like
1 year ago
COMPETITION: Win four tickets to Republic of Ireland v Denmark
2 years ago
The Football Spin on change at the FAI, Declan Rice's smart move and why Ireland fans should be angry
2 years ago
The Football Spin Heartbreak Valentine's Day Declan Rice Special
2 years ago
"You cheeky bollocks!" - The key takeaways from Mick McCarthy's first press conference as Ireland manager
2 years ago
OFFICIAL: Mick McCarthy has been named as Republic of Ireland manager
2 years ago
Former Irish players have a great story about Brian Kerr and how he raised team morale
Next Page