WATCH: Kim Clijsters dresses Irish fan in skirt and invites him to play tennis at Wimbledon

We have watched this over and over again.

They're having mighty craic at Wimbledon.

It's the stuff you dream about. You're in the crowd watching your favourite sport. The footballer/hurler/rugby player gets injured and you get the unexpected call on to the pitch from the manager.

END_OF_DOCUMENT_TOKEN_TO_BE_REPLACED

This happened at Wimbledon on Friday but there was no injury involved. Kim Clijsters was getting ready to serve and could be heard asking on the court about where she should serve.

There was a big shout from the crowd from an Irish fan who said "body line" just as Clijsters was gearing up to take her shot.

She took his advice on board and subsequently invited the Irish supporter down on to the court so he could play the point. 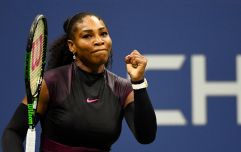 END_OF_DOCUMENT_TOKEN_TO_BE_REPLACED

The Irish fan accepted the invitation on to the court and briefly took part in the invitational match between Clijsters and Rennae Stubbs and Andrea Jaeger and Conchita Martinez on Friday.

Clijsters ran to her kit bag to fetch her new friend a white skirt which she then tried to put on the Irish fan which made for hilarious viewing. 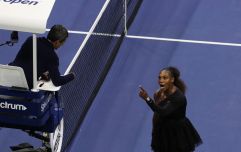 END_OF_DOCUMENT_TOKEN_TO_BE_REPLACED

All kitted out now in a white skirt and t-shirt, the Irish fan was then put to the test and the four-time Grand Slam winner Clijsters, after she had finished hysterically laughing, sent a thundering serve his way which he somehow managed to return.

However, his good luck didn't last for very long and his second attempt at hitting the ball went straight into the net before the game broke down completely.

popular
20 years ago, one of the best sci-fi movies of the 21st century was a box-office bomb
Peter Kay moved to tears on stage while opening his first stand-up tour in 12 years
U2 drummer Larry Mullen Jr. says band may perform without him in 2023
Simon Cowell concerns fans with appearance as they 'don't recognise him'
Netflix has just added 30 big movies to its library
Boy, 1, eaten alive by 11-foot crocodile in front of dad on fishing trip
Mia Khalifa claims seaside town is better than Miami
You may also like
10 months ago
Novak Djokovic speaks out after losing visa battle in Australia
10 months ago
Novak Djokovic facing deportation after visa cancelled for the second time
10 months ago
Andy Murray fires back at Nigel Farage over support of Novak Djokovic
1 year ago
Glorious scenes as hero dog breaks Guinness world record
3 years ago
The Serena Williams poll shows just how warped reality has become
3 years ago
Controversial Serena Williams cartoon not racist, watchdog rules
Next Page