Everyone in JOE has, of course, been playing cricket since before Kevin O’Brien was born (this is obviously a lie), but it appears as if there are more than a few Johnny-come-latelys happy to hop aboard the bandwagon now that we’re doing well at the Cricket World Cup.

It was the same when we beat England four years ago and after we backed up a momentous win over the West Indies with a two-wicket success over the UAE this morning, the bandwagon gathered pace at a frightening rate. 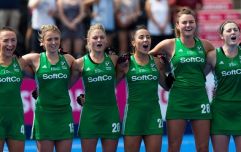 END_OF_DOCUMENT_TOKEN_TO_BE_REPLACED

We should point out that there are a significant number of fans who have long supported the Irish cricket team and are far more than just bandwagon-hoppers, but they’ll probably be glad of the company from now until this exciting journey comes to an end.

Also, let it not take away from the outstanding achievement by Phil Simmons and his players, who are doing us proud with their fantastic exploits Down Under.

Just for a bit of fun, here are some of our favourite posts from Ireland's newest fans after the great win this morning.

Ever since my underage cricketing days in Leitrim, I've been dreaming of days like these. #Bandwagon

Has anyone got the route the cricket bandwagon goes on? I'm on the northside is that a problem?

Good to see Ireland score more cricket goals than the other team. #bandwagon

Not a cow milked in ____________ tonight. (Have no idea of the Irish #cricket stronghold.) #Bandwagon #BackingGreen #UAEvIRE

And what about these spoofers?

popular
Netflix has just added an incredibly tense 97-minute thriller
18 counties hit with weather warning as temperatures set to reach 29 degrees
Nearly 100 flights delayed at Dublin Airport on Monday
GSOC investigating road crash in Monaghan that left multiple people injured
QUIZ: Can you get top marks in this short but tricky Irish geography quiz?
QUIZ: Can you name all the counties in Ireland without the letter 'E'?
WhatsApp introduces way to choose who can and can't see you're online
You may also like
1 week ago
Elon Musk countersues Twitter in legal battle over takeover bid
2 weeks ago
Joe Rogan calls out Jordan Peterson over Elliot Page tweet that got him kicked off Twitter
3 weeks ago
Twitter officially sue Elon Musk to force him into buying the platform
1 month ago
Elon Musk says he is "terminating" his Twitter takeover deal
2 months ago
Elon Musk accused of sexual misconduct involving flight attendant on private jet
2 months ago
Elon Musk's $44 billion acquisition of Twitter on hold due to fake accounts
Next Page