'Certainly would give England something to play for!'

Football fans have upped the stakes ahead of this Friday's World Cup clash between England and USA, suggesting the losing team should have to keep James Corden.

The English actor and Late Show host has hardly been out of the headlines in recent weeks, with incidents at a fancy French restaurant and claims he's stolen jokes. 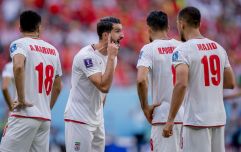 END_OF_DOCUMENT_TOKEN_TO_BE_REPLACED

Corden was briefly banned from New York City's Balthazar for rude behaviour and was accused earlier this month of stealing jokes from comedians Ricky Gervais and Noel Fielding.

Football fans have since suggested Corden would be a good prize for the losing team between the Three Lions and the USA.

England vs. USA on Friday. The loser has to keep James Corden. 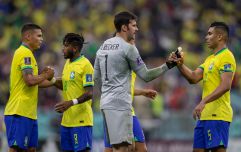 END_OF_DOCUMENT_TOKEN_TO_BE_REPLACED

One person on Twitter wrote: "There's a lot at stake for either England & USA on Friday; whoever loses has to keep James Corden."

"That should be written into the contract."

"Certainly would give England something to play for!" another joked, while a third added: "Good god, the stakes have been upped," Indy100 reported.

Someone else suggested that fellow Brit Piers Morgan should be added to the tradeoff with Corden: "And Piers Morgan. The stakes couldn't be higher."

Another commenter suggested the winner got to deport him.

The winner gets to deport Piers Morgan

In October, Balthazar restaurant owner Keith McNally called Corden "abusive" in an Instagram post and detailed two occasions where the presenter's behaviour was not up to standard.

The first involved Corden demanding a server bring him more drinks after reportedly finding a hair in one of his beverages.

The second was said to involve the host's wife ordering an egg yolk omelette, which Corden later suggested was not up to scratch. There was egg white mixed with the egg yolk and he asked for the dish to be made again.

When the dish returned to the table with fries, rather than salad, McNally said Corden yelled at the server telling her she couldn't do her job.

Corden has since apologised on air for his actions at the restaurant.

On the jokes front, Corden was accused of stealing a 2018 joke from Gervais and a vintage 2017 gag from Fielding.

Gervais' joke was made in his Netflix special Humanity and is about a sign advertising guitar lessons. Corden used it to discuss Elon Musk's take over at Twitter.

The Fielding joke was about how to catch a mugger and was told on The Late Late Show with Matthew Broderick.

popular
Boy seriously injured after alleged dog attack in Wexford
20 years ago, one of the best sci-fi movies of the 21st century was a box-office bomb
Very popular US fast food chain planning to open in Ireland
Katherine Ryan says famous TV star is a ‘predator’ and everyone in industry knows
Surprise frontrunner emerges as potential next James Bond as producers 'love him'
QUIZ: Only the sharpest will get 100% in this General Knowledge test
QUIZ: JOE's Big News Of The Day Quiz #19
You may also like
3 weeks ago
James Corden responds to accusations he copied a Ricky Gervais joke
3 weeks ago
Ricky Gervais calls out James Corden for copying one of his jokes word for word
1 month ago
James Corden labels Pierce Brosnan 'f***ing rude' after he was pushed by actor
1 month ago
James Corden recalls father's advice after "rude, rude comment" to restaurant staff
1 month ago
James Corden reportedly apologises after alleged "abusive" behaviour to restaurant staff
1 year ago
Ten of the best memes as James Corden dressed as a rat stops traffic for flashmob in LA
Next Page