The Republic of Ireland player took to Twitter to vent his anger.

Irish midfielder James McClean has criticised Match of the Day for failing to show the reaction from fans after his tackle on Tom Ince during West Brom's Premier League match with Huddersfield on Saturday.

McClean did pick up a yellow card for his tackle on Ince but after the incident, fans began throwing objects at him which was something that the football programme did not show. 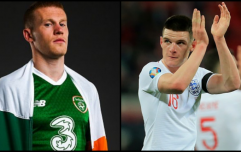 END_OF_DOCUMENT_TOKEN_TO_BE_REPLACED

Match of the Day's failure to address the reaction of the fans was something that angered McClean and he took to Twitter to vent his frustration. He stated that bottles, coins and lighters were among the objects that were thrown at him.

It is currently the time of year when poppies are worn in the United Kingdom. Poppies are sold from around 26 October but people normally don't start wearing them until 31 October with Remembrance Sunday falling on the second Sunday in November each year which happens to be 12 November this year.

James McClean has openly said in the past that he refuses to wear a poppy but it is something which still gets highlighted every year.

The winger has even gone as far as writing an open letter to West Brom fans explaining why he doesn't wear one but he still gets rough treatment from fans about it.

He also took to Instagram to condemn the actions of the fans who threw objects at him.

"Frustrating is the best word to describe today," he wrote.

"P.s launching bottles and other objects from up in the stands make (sic) you cowards not hard men."

McClean will soon be preparing for Ireland's two crucial World Cup play-off matches against Denmark on 11 and 14 November with the winner booking their place in Russia in 2018.

The Big Reviewski || JOE · The Big Reviewski with Ray Liotta, Goodfellas facts & Tom Hanks making us cry
popular
The JOE Friday Pub Quiz: Week 262
QUIZ: The Ultimate Movie Gangster Quiz
One of the most-anticipated movies of the last few years is finally available to watch at home this week
Tom Duffy's Circus looking to hire some clowns
A new bank holiday may be on the way as part of this year's Budget
Waterford has been crowned as the best place to live in Ireland
Leading Australian Covid-19 tracking website revealed to be run by three teenagers
You may also like
7 months ago
"Anybody would have a breaking point" - James McClean speaks out about social media abuse
7 months ago
FAI and PFA come out in support of James McClean amid social media abuse
2 years ago
James McClean shares a disgusting, racist, and hate-filled birthday card he received (NSFW)
2 years ago
James McClean responds to the departure of Martin O'Neill with a dig at critics
2 years ago
FA to launch its first ever investigation into sectarian abuse following James McClean incidents
2 years ago
James McClean was sent death threats and vicious packages in the post following his poppy stance
Next Page