Jamie Carragher suspended by Sky for the remainder of the season

Jamie Carragher has been suspended for the rest of the football season.

Following last weekend's controversy, when Carragher was filmed spitting at a family from his car in the aftermath of Manchester United's 2-1 victory over Liverpool, the Sky Sports pundit's actions were investigated by the broadcaster.

Carragher promptly issued an apology to the family and appeared on Sky News, where he described the incident as "a moment of madness". 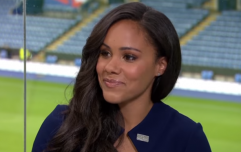 END_OF_DOCUMENT_TOKEN_TO_BE_REPLACED

The former Liverpool defender did not appear on Monday Night Football this week and, in a statement on Wednesday morning, it was confirmed that he will not appear on air for the remaining two months of the season.

"Following an internal review, Sky has suspended Jamie Carragher for the remainder of the football season," a Sky Sports spokesperson told Sky News.

"Jamie has taken full responsibility for what has happened and we will ensure he gets the help he needs to guarantee something like this never happens again.

"Before the start of the next season we will sit down with Jamie to discuss whether he is ready to return to his role."

The father who filmed the incident has since given an interview in which he claimed that his family had received death threats but Carragher has urged his supporter to end the abuse.