One of the all-time greats, Cristiano Ronaldo, was on hand to answer a few questions in Madrid as the Emirates Global Ambassador.

Cristiano Ronaldo was announced as a Global Ambassador for Emirates today in Madrid at the training ground in Valdebebas, and he took part in a Q&A with the media at the event where he talked about his passion for the game, the World Cup and his latest partnership with one of football's biggest sponsors and the official partner of football's biggest tournament in Brazil this summer, which is just 74 short days away.

In the same press conference that the Portuguese captain and winner of the FIFA Ballon d’Or 2013 was unveiled as the newest Global Ambassador in Madrid, the airline also premiered its campaign video featuring the football superstar alongside Brazilian legend and fellow Global Ambassador for Emirates, Pelé, which you can catch just over here.

The Real Madrid and Portuguese star was kind enough to answer a few questions about his national side, the World Cup, and what it was like to be around another all-time great, Pelé.

What was it like to film with Pele in Dubai?

END_OF_DOCUMENT_TOKEN_TO_BE_REPLACED

CR: It was amazing, a great experience to be there in Dubai, and to take a little holiday to have some rest during a long season! It was so much fun. I enjoyed it a lot, and I think the ad really captures just how much fun it was to be there and film it. 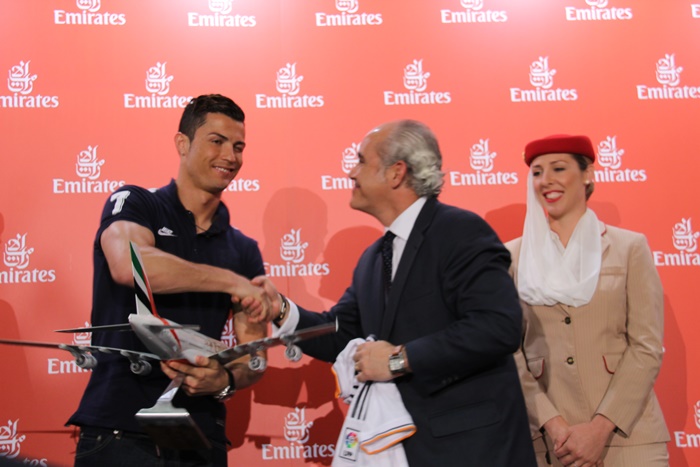 What did you think of Dubai?

END_OF_DOCUMENT_TOKEN_TO_BE_REPLACED

CR: It's a great place and it was a fantastic experience to film there. The weather was beautiful, and thankfully I was able to be there with my friends and Pelé! It's a great city. It was fantastic to do something with Pelé also, who is one of the greatest ever, a real legend. This ad really shows the different footballing generations, the new and the old, with great respect to both.

So which players inspired you growing up?

CR: For me, when I was a kid I always looked to the national team as something that I should aim towards, that should be my ambition. I know I always say that when I'm asked this question, but that really was always my focus and my dream and I achieved that at just 18 years old. I always looked to the players that were best in that team, so for me it was Luis Figo, Rui Costa, Fernando Couto, players like this, but you always look to other great players from around the world for inspiration also. 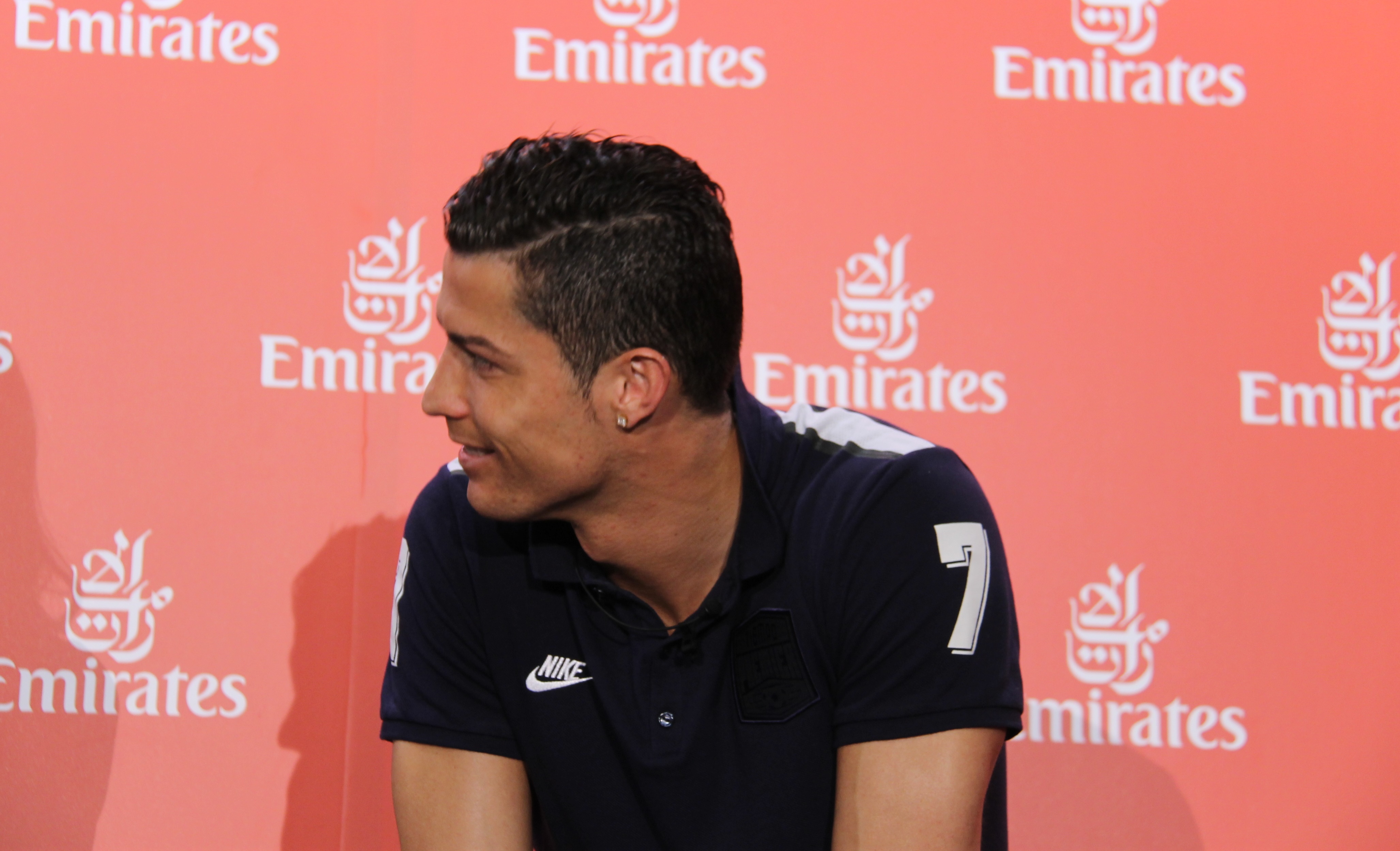 What would be your advice to any young players?

END_OF_DOCUMENT_TOKEN_TO_BE_REPLACED

CR: You always have to work hard if you're going to have success. Being a footballer is a really great job, but people only see the good side sometimes and forget that it's also extremely difficult, so you have to work all the time. You need to always push yourself; when there's pressure and when there's no pressure. Dedicate yourself and work hard, that's always my advice. 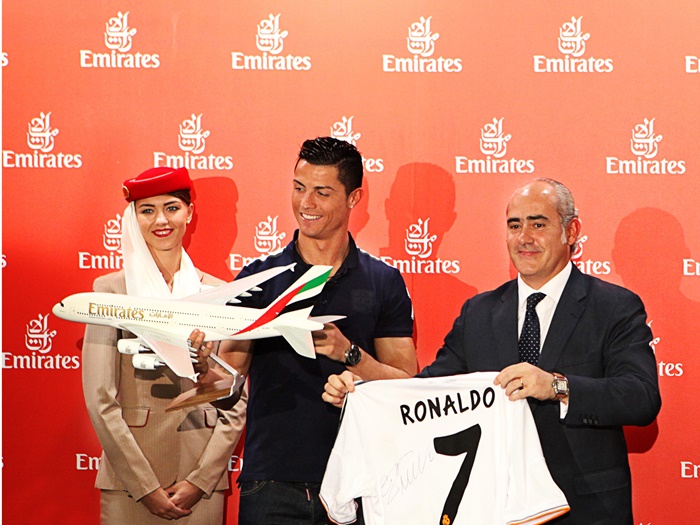 So you're headed to the world cup with Portugal, how do you rate your chances?

CR: We're not favourites which is good for us I think, there are many other teams who have bigger expectations, but it will be very difficult. I'm going to try to get to or to watch all the games that I can, because I have plenty of friends in the other teams that I want to see play well, and also it's important that we look at how other teams are playing. It's going to be really exciting this summer!

Ronaldo was on hand in Madrid to be announced as the global ambassador for Emirates. An official FIFA Partner since 2006, they have been involved with the FIFA Women’s World Cup, the FIFA U20 and U17 World Cup, as well as the FIFA World Cup – including the upcoming 2014 event in Brazil.

Operating daily flights from Dubai to Rio de Janeiro and São Paulo, Emirates is expected to transport over 18,000 passengers during the month-long tournament this year. The airline connects Brazil and the South American continent to the world, and facilitates links beyond Dubai to the Far East, Australia, the Middle East and Africa.

To learn more about this latest campaign featuring two #AllTimeGreats, check out the Emirates website

popular
A classic Western is among the movies on TV tonight
One of the most underrated sequels of all time is among the movies on TV tonight
The JOE Friday Pub Quiz: Week 300 - the Triple Century
Met Éireann gives update on weather warnings for this weekend
An underrated Jason Statham thriller is among the movies on TV tonight
The content warning for this week's episode of The Boys is incredible
The 50 most iconic songs of all time* have been revealed
You may also like
2 days ago
Gary Lineker says he suffered racist abuse during football days due to "darkish skin"
3 weeks ago
Merseyside police defend ‘exemplary’ Liverpool fans tear gassed by French police
1 month ago
BBC trainee accidentally posts message mocking Man United live on TV
1 month ago
Kurt Zouma charged with three animal welfare offences
1 month ago
The JOE Friday Pub Quiz: Week 295
1 month ago
Wagatha Christie trial: Rebekah Vardy denies leaking Riyad Mahrez message
Next Page